The Annual Meetings of the Boards of Governors of the World Bank Group (WBG) & International Monetary Fund (IMF) 2019 was held in Washington, DC, United States (US) from October 14- 20, 2019. It included the meetings of the Development Committee, the International Monetary and Financial Committee, the Group of Twenty (G20), the Group of Twenty-Four (G24), and various other constituencies. 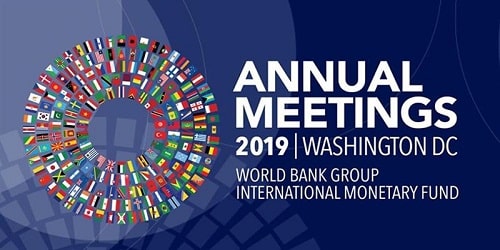 About the annual meetings:
i. The Annual Meetings are usually held for two consecutive years at the WBG and IMF headquarters in Washington, D.C. and every third year in another member country. The plenary session of the World Bank Group Boards and the IMF of Governors is scheduled only during the Annual Meetings in the autumn.
ii. The Inaugural Meeting of the Boards of Governors was held in Savannah, Georgia, US in March 1946. The first Annual Meetings were held in Washington in 1946.
iii. The 2021 Annual Meetings of the World Bank Group (WBG) and the International Monetary Fund (IMF) will take place in Marrakech, Morocco, in October 2021.
iv. The next meeting of the Development Committee and the IMFC is scheduled to be held on April 18, 2020, in Washington, DC, United States.