The Vibrant Goa Global Expo and Summit 2019 (VG GES 2019) was conducted from October 17-19, 2019 at Goa University, Taleigao, Goa. The summit was inaugurated by Chief Minister of Goa Shri Pramod Sawant, in the presence of all high officials. 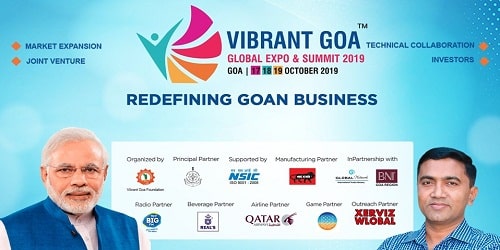 Focus: The key focus of the summit was to make development in areas such as innovation, sustainability, industries, technology, youth and skill development, knowledge sharing and networking. VG GES was one of a kind display expo to bridge the gap between goan industries and other national/international industries. Some of the events during the VG GES are as follows,

Goa and SPTI signed 2 MoU for start-up centre and IT park
The department of Information and Technology(DoIT) of the Goa govt signed 2 Memorandum of Understandings (MoU) with the Software Technology Parks of India (STPI) to establish a start-up centre in the state that would boost the IT industry in the state. Another MoU was signed to set up an IT park at Dona Paula, Goa.

17 MoUs signed at the event: In order to promote business ventures in Goa, the state CM announced the signing of 17 MoUs.

Other key highlights of the summit:

About STPI:
♦ Founded- 1991
♦ Headquarters- New Delhi.
♦ STPI is an autonomous body under the Ministry of Electronics and IT with the objective to promote, and boost software exports from India.
♦ Currently it is setting up 28 centres of excellence across the country.