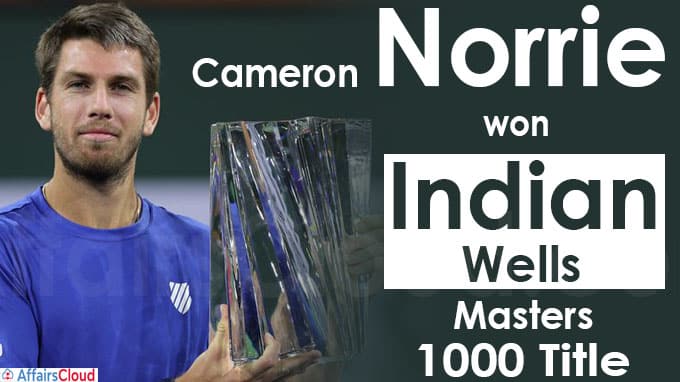 i.ATP rankings as of 18th October 2021 Novak Djokovic (rank 1) of Serbia tops the ranking followed by Daniil Medvedev(Russia) and Stefanos Tsitsipas(Greece) at rank 2 and 3 respectively.

ii.WTA Rankings as of 18th October 2021, Ashleigh Barty of Australia tops the ranking followed by Aryna Sabalenka of Belarus and Karolina Pliskova of Czech Republic (short form name Czechia) at rank 2 and 3 respectively.

Elise Mertens of Belgium and Su Wei Hsieh of Taiwan won the 2021 Women’s doubles title at the 2021 BNP Paribas Open against Veronika Kudermetova of Russia and Elena Rybakina of Kazakhstan.

i.Previously Su Wei Hsieh has won the Indian wells’ doubles title in 2014 (with Peng Shuai of China) and 2018(with Barbora Strycova of the Czech Republic).

John Peers of Australia and Filip Polasek of Slovakia won the Men’s Doubles title at the 2021 BNP Paribas Open against Aslan Karatsev and Andrey Rublev of Russia.