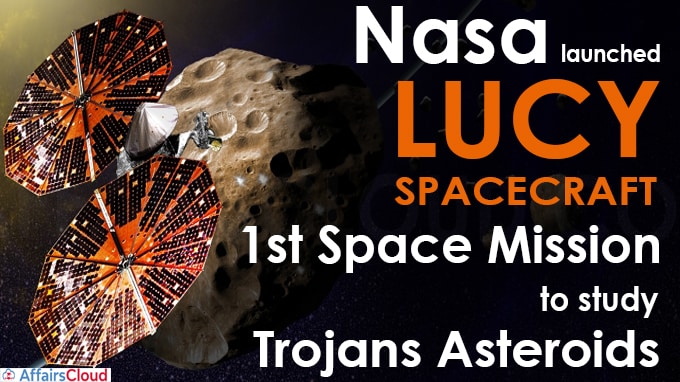 In October 2021, the National Aeronautics and Space Administration (NASA) launched the 12-year mission of ‘Lucy’, which is its 1st expedition to the Trojan asteroids of Jupiter to study the evolution of the solar system and the formation of giant planets.

i.The Trojan is a small celestial body (most of those are asteroids) that are leftovers from the early days of the solar system. It shares the orbit of a larger planet or of large moons.

ii.The Jupiter trojans asteroids are the swarm of asteroids that share Jupiter’s orbit around the Sun.

Key Points of the Mission:

i.During the mission, Lucy will spend 6 years cruising through the solar system and it would come back to the Earth 3 times to take assistance from the planet’s gravitational field to build up enough momentum to reach Jupiter.

ii.Lucy will study the geology, composition, density and structure of each of its Trojan targets.

iii.In 2025, Lucy will reach its first target of a small asteroid in the main belt between Mars and Jupiter named for Johanson (Asteroid 52246 Donald Johanson).

After Lucy, the next mission of NASA was DART (Double Asteroid Redirection Test), which was scheduled to be launched on November 23, 2021, to prevent a hazardous near-earth binary asteroid Didymos from striking Earth.

i.The asteroid Didymos consists of two bodies, the primary one being 780 meters in length and the secondary body (called moonlet) of about 160 meters. The secondary body is posing a threat of collision with Earth.

ii.NASA’s DART mission is aimed to collide with that secondary body of Didymos and change its orbital period by several minutes.

iii.The mission will work under the kinetic impactor technique and it will mark NASA’s 1st demonstration of an intercept path of near-Earth objects.

iv.The DART was scheduled to be launched from California’s Vandenberg Space Force Base through the SpaceX Falcon 9 rocket to reach Didymos.

NASA also set to launch another mission named ‘Psyche’ to study the ‘Psyche asteroid’ that orbits the Sun in the main asteroid belt, between Mars and Jupiter. The mission will be intended to understand the formation of the early solar system.

Note – In October 2024, NASA plans to launch a probe called Europa Clipper, which will arrive in the Jupiter system in April 2030.

NASA plans to implement two new missions DAVINCI+ and VERITAS to Venus, Earth’s nearest also called sister planet. NASA will spend $500 million for each mission. Both missions will be expected to launch between 2028-2030.

i.Jupiter is the 5th planet from the Sun and it is the biggest planet in our solar system.
ii.Jupiter is a gas giant and it is made mostly of hydrogen and helium. They also have rings (but they are too faint to see very well). It has around 79 confirmed moons.
iii.Time: Since Jupiter rotates once about every 10 hours, one day on Jupiter goes by in 10 hours (a Jovian day). One year on Jupiter is the same as 11.86 Earth years.