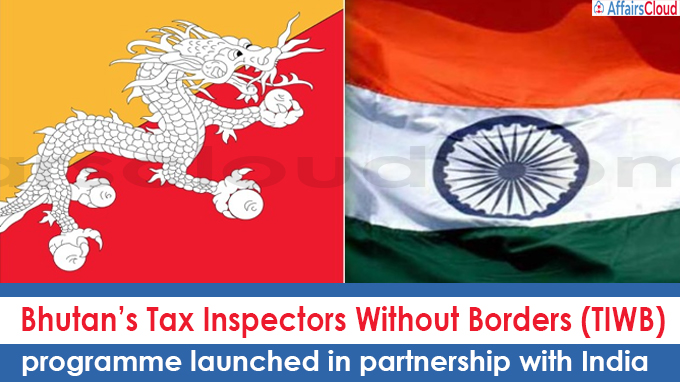 On June 23, 2021, Tax Inspectors Without Borders (TIWB) programme, a joint initiative of the United Nations Development Programme (UNDP) and the Organisation for Economic Cooperation and Development (OECD), virtually launched in Bhutan in partnership with India where the latter acts as its Partner Jurisdiction. As a result, India will provide its Tax Experts to the programme.

Role of India in TIWB programme:

India will lend its support for strengthening the tax administration of Bhutan by sharing technical know-how and skills with its tax auditors. This will be done in collaboration with the UNDP and the TIWB Secretariat.

Launched in July 2015, it focuses on strengthening the developing countries’ auditing capacity and multinationals’ compliance worldwide. Ms. Rusudan Kemularia is the head of TIWB Secretariat which is located in Paris, France

Jagannath Bidyadhar Mohapatra, Chairman of the Central Board of Direct Taxes (CBDT), and Nipud Gyeltshen, the Officiating Director General, Department of Revenue & Customs, Bhutan along with Rusudan Kemularia, and other senior officers from participating organizations.

The oldest project of the Border Roads Organisation (BRO) was DANTAK, a project established on April 24,1961 in Bhutan, by His Majesty the Third King and then Prime Minister Jawahar Lal Nehru. The Diamond Jubilee has been commemorated to mark the 60th anniversary of the project. This project was aimed at constructing motorable roads in the Kingdom of Bhutan.

About Organisation for Economic Cooperation and Development (OECD):