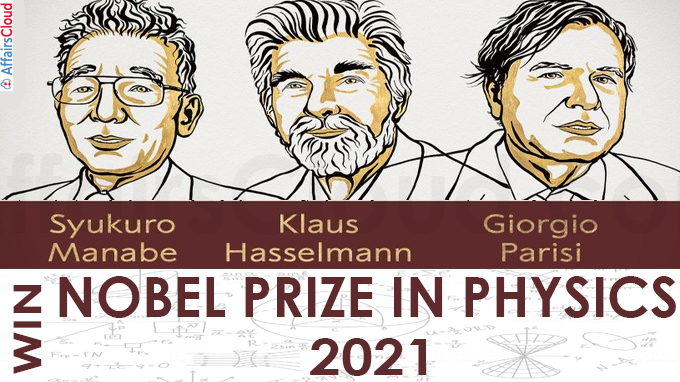 i.Syukuro Manabe ,90, a Japanese-American meteorologist and climatologist who was born in 1931 at Shingu, Ehime Prefecture, Japan.

iii.Syukuro Manabe has been recognized for the physical modelling of Earth’s climate, quantifying variability and reliably predicting global warming and specially for demonstrating how increased levels of carbon dioxide in the atmosphere lead to increased temperatures at the surface of the Earth.

i.Klaus Hasselmann, 89, a German oceanographer and climate modeller was born in 1931 at Hamburg, Germany.

ii.He currently working as a Professor at Max Planck Institute for Meteorology, Germany.

iii.He has also been recognized for the physical modelling of Earth’s climate, quantifying variability and reliably predicting global warming.

i.Giorgio Parisi ,73, an Italian theoretical physicist was born in 1948 at Rome, Italy.

ii.He is now a professor of Quantum Theories at the Sapienza University of Rome,Italy.

ii.Giorgio Parisi has been recognized for the discovery of the interplay of disorder and fluctuations in physical systems from atomic to planetary scales.

Roger Penrose, Reinhard Genzel and Andrea Ghez have been awarded the 2020 Nobel Prize in Physics for their pioneering work on black holes and the Milky Way’s darkest secret.