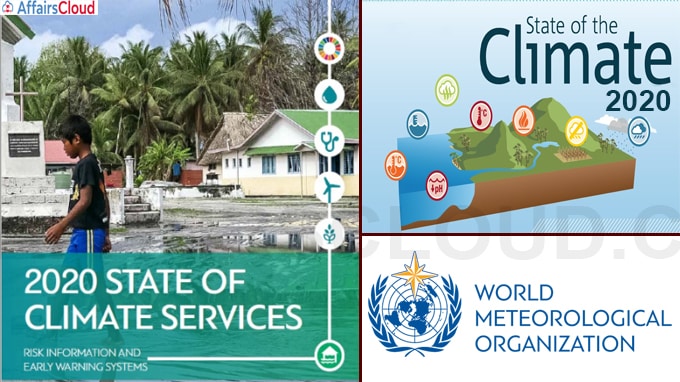 On the occasion of the International Day for Disaster Risk Reduction i.e. on October 13, 2020, the “State of Climate Services 2020 Report: Move from Early Warnings to Early Action” released by United Nations World Meteorological Organization (UN-WMO) which is produced by 16 international agencies and financing institutions.

-The number of people that require humanitarian assistance will increase by 50% from 108 million people in 2018 which will cost 20 billion USD per year.

-The average number of deaths in the last 50 years has decreased by 50 years.

-Only 40% of WMO members (138) have Multi-Hazard Early Warning Systems (MHEWS) which means globally on average one in three people is still not covered by early warnings.

-Between 1970 and 2019, 79% of disasters worldwide involved weather, water, and climate-related hazards.

-The situation is severe in small island developing states (SIDS) and least developed countries (LDCs). Since 1970, SIDS have lost US$ 153 billion due to weather, climate and water related hazards while 1.4 million people (70% of the total deaths) in LDCs lost their lives.