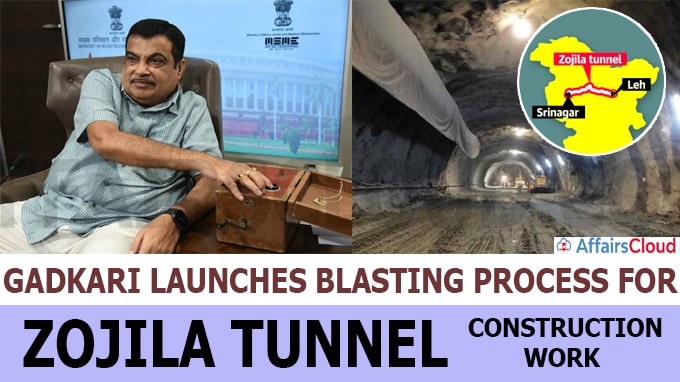 On October 15, 2020, during a virtual ceremony, Union Minister Nitin Jairam Gadkari of Ministry of Road Transport & Highways (MoRTH) & Ministry of Micro, Small & Medium Enterprises (MoMSME) initiated the first blasting process for the construction of one of the longest bi-directional road in Asia i.e. 14.15 Km Zojila Tunnel with altitude of about 3000 m in Jammu & Kashmir (J&K) to provide all-weather connectivity between Srinagar valley and Leh (Ladakh plateau) on National Highway (NH)-1.

The project will be implemented by National Highways and Infrastructure Development Corporation Ltd (NHIDCL) while its construction work will be carried by Hyderabad (Telangana) based Megha Engineering & Infrastructure Limited (MEIL).

The Zojila Tunnel project was first awarded to Infrastructure Leasing and Financial Services (IL&FS) Transportation Network but the order was cancelled in January 2019 after the financial crisis surrounding the parent company IL&FS . After that NHIDCL invited fresh tender for the construction where MEIL was emerged as the lowest bidder quoting Rs 4,509.5 crore.

How will the Zojila Tunnel Project be beneficial?

-It will enhance the safety of the travelers crossing Zojila Pass and would reduce the Travel time from more than 3 hours to 15 minutes.

-This will provide full year connectivity on road from present 6 months in a year (half year) due to heavy snowfall.

I-t will also create all round economic and socio-cultural integration between these regions with the rest of the country.

7 other ongoing works in J&K:

There are seven tunnel roads under construction in the Jammu and Kashmir region.