Dear Aspirants,
Here we are providing you the detailed syllabus & exam pattern for the Combined Higher Secondary Level (10+2) Examination 2016. 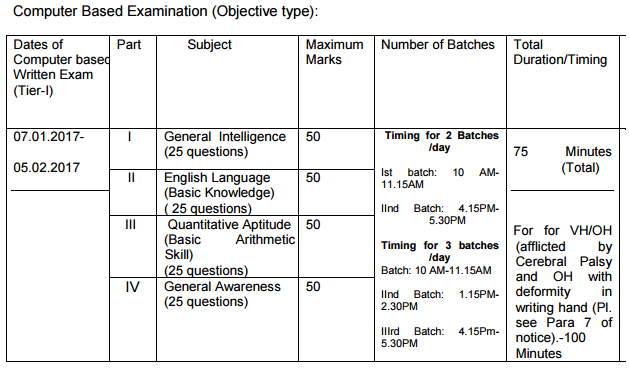 Written examination consists of Objective Type- Multiple choice questions only. The questions will be set both in English & Hindi for Part-I, III & IV. There will be negative marking of 0.50 marks for each wrong answer.

Tier-II (Descriptive Paper)
Tier-II Paper of CHSL 2016 will be a descriptive Paper of 100 Marks in ‘Pen and Paper Mode. The duration of the paper would be for one hour (20 minutes compensatory time will also be provided to the candidates mentioned in Para 7 above). This paper has been introduced to assess the writing skills of the candidates which is necessary in Government jobs. The Paper would comprise writing of an Essay of 200-250 words and Letter / Application writing of approximately 150-200 words. The minimum qualifying marks in Tier-II would be 33 per cent. The performance in Tier II would be included for preparing merit. The paper will have to be written either in Hindi or in English. Part paper written in Hindi and Part in English will not be evaluated.

Tier-III Examination:
Tier-III of the Examination would continue to be the Skill Test / Typing Test which would be of a qualifying nature. The final merit of the successful candidates would be determined on the basis of total score obtained by them in Tier-I and Tier-II.

Questions are designed to test the candidate’s general awareness of the environment around him and its application to society. Questions are also designed to test knowledge of current events and of such matters of everyday observation and experience in their scientific aspect as may be expected of an educated person. The test will also include questions relating to India and its neighbouring countries especially 10 pertaining to History, Culture, Geography, Economic Scene, General policy and scientific research.