As per the Notice of the Commission published on 10-OCT-2016, Servers of the SSC were closed down for maintenance from 10.10.2016 (1200 Hours) to 13.10.2016 (1200 Hours). Closing date for receiving applications for above Examination was therefore suitably extended. However a few candidates have reported to the Commission that they were able to register themselves and complete their applications for CHSL-2016 during that maintenance window period and that they were allotted Registration IDs starting with ’99’ digits.

Being a declared maintenance period, such applications were treated as invalid by the Computer System. The Commission has decided to give opportunity to only, repeat only, those candidates who were able to complete and submit their applications during this period to appear in the Examination. All such candidates may submit the scanned copies of their completed applications during this period to their respective Regional Offices through email IDs given below, latest by 1700 Hours on 09-01-2017: 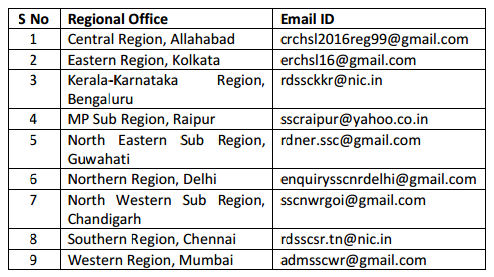