On September 16, 2019, President of Sri Lanka(SL) Shri Maithripala Sirisena unveiled “Lotus tower” which is the tallest tower of South Asia that cost over $100 million. 80% of the funding cost of the tower situated in Colombo, Srilanka has been done by China under the Belt and Road Initiative (BRI). 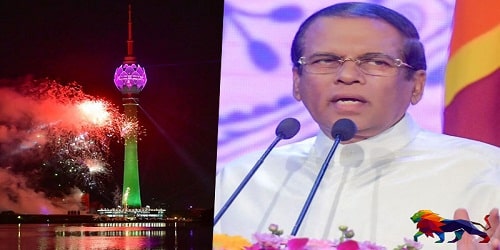 Key points
i. The building though under construction was opened by the SL president for public access. This building which is expected to be SL’s ‘digital TV tower’, is foreseen as an epitome of SL’s culture, economy and development.
ii. Building features: It is a 350-meter-tall building having 17 storeys spread over an area of 30,600 sq. metres.
A television tower, telecommunications museum, restaurants, observation deck, shopping mall, auditorium and a conference centre is comprised within the building. It is built with fibre optic cables equipped with telecommunication equipment.
iii. Lotus Tower agreement: The lotus tower agreement was signed between China and Srilanka by the then SL president Mahinda Rajapaksa in 2012 under BRI to build highest TV tower in South Asia. The general contractor for the agreement was China National Electronics Import and Export Corporation (CEIEC).
iv. Critics: India has been critical of Chinese President Xi Jinping’s pet project BRI, as it comprises of $50billion China Pakistan Economic Corridor (CPEC) passing through Pakistan occupied Kashmir(POK).
v. The tallest TV tower of India is the Rameswaram Television Tower in Rameswaram, TamilNadu with height 323mts (1060 ft).