Highlights of steps towards Women 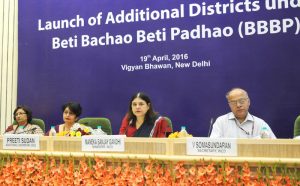 In addition to the existing 100 districts of the country with low child sex ratio, now it is extended for additional 61 districts which was launched by Smt Maneka Sanjay Gandhi, Union Minister of women and Child Development.