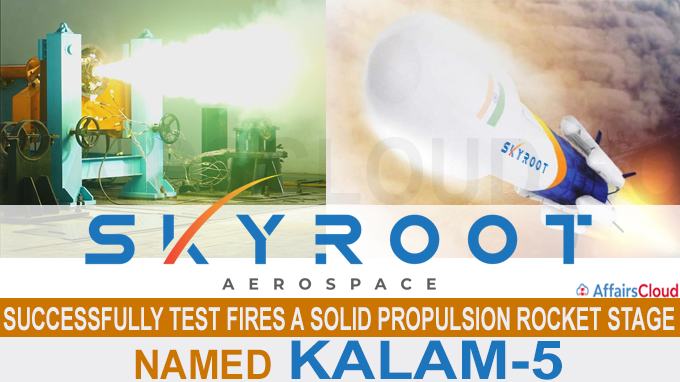 i.It will now be used for propulsion of their maiden rocket ‘Vikram-1’ which is expected to be launched in December, 2021 with the help of Indian Space Research Organization (ISRO).

ii.‘Kalam-5’ is the 1st of 5 Kalam series of solid rocket motors, the other four rocket motors are expected to be tested in 2021.

ii.They have been using advanced Carbon Composite Structure which are five-times lighter than steel & will help in improving the efficiency of the rocket.

iv.It  has zero moving parts which means they are highly reliable.

i.Vikram-I is a rocket being developed by Skyroot Aerospace. It will be powered by 4 engines – 3 solid-fuel stages & 1 liquid-fueled stage.

ii.Skyroot has successfully tested all propulsion technologies in Vikram-1 vehicles.

iv.The rocket will be used for launching small satellites by ISRO & other space research organisations.

i.It is a startup founded by Former scientists of ISRO, it has raised USD 4.3 million and has set a target to raise USD 15 Million in 2021.

ii.Indian National Space Promotion and Authorization Centre (IN-SPACe) set up by the Government of India will act as the facilitator & regulator.

iii.Private players are also allowed to use ISRO’s infrastructure, scientific and technical resources, and even data for their space programmes.