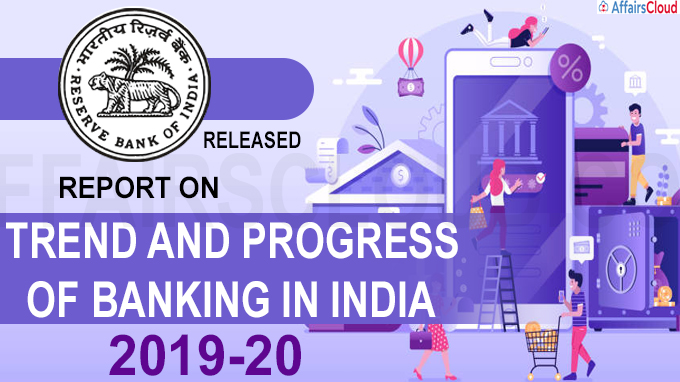 On December 29, 2020, Reserve Bank of India (RBI) released “Report on Trend and Progress of Banking in India 2019-20” under the broad theme of impact of COVID-19 on banking and non-banking sectors, and the way forward. This report for the year ended June 30, 2020 has been submitted to the Central Government in terms of Section 36(2) of the Banking Regulation Act, 1949.

Here are the highlights of the report:

–Net profits of SCBs turned around in 2019-20 after losses in the previous two years; in H1:2020-21, their financial performance was shored up by the moratorium.

–The Insolvency and Bankruptcy Code (IBC) and the Securitisation and Reconstruction of Financial Assets and Enforcement of Securities Interest Act, 2002 (SARFAESI) channel aided the process of NPA recovery.

–The performance of state co-operative banks improved, both in terms of profitability and asset quality.

–The consolidated balance sheet of NBFCs decelerated in 2019-20 due to near stagnant growth in loans and advances although some improvement became visible in H1:2020-21.

–On frauds in the banking sector, the report said, operational risk has emerged as a major source of risk. Although 98 per cent of frauds in terms of value were related to loans, their occurrence was spread over several previous years.

i.RBI also decided that banks can lend up to Rs 7.5 crore from earlier Rs 5 crore to individual retail and small business borrowers (i.e. with turnover of upto Rs 50 crore) and still be eligible for a 75% risk weight.

ii.RBI also extended the enhanced borrowing facility provided to banks under the marginal standing facility (MSF) scheme by six months till March 31, 2021. It was initially available up to June 30, 2020 and was later extended up to September 30, 2020 due to economic disruptions amid COVID-19.