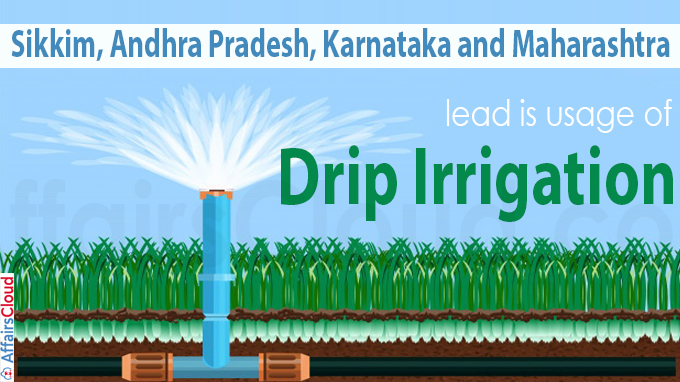 According to data presented by the Ministry of Agriculture and Farmers Welfare (MoAFW) to Lok Sabha,  4 states namely Sikkim, Andhra Pradesh, Karnataka & Maharashtra have more than half of the net cultivated farmlands under micro-irrigation in India. 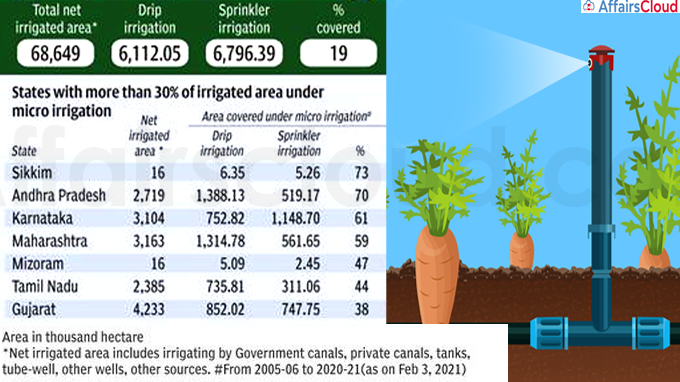 *Area are in thousand hectares

i.In India, The total irrigated land under micro-irrigation is just 19%.

ii.Agricultural lands under micro-irrigation is 12, 908.44 Thousand Hectares out of which,

Department of Agriculture, Cooperation and Farmers Welfare  also carried out an impact evaluation study of Micro-irrigation scheme in India.

The data highlights that upto 60% of water used for sugarcane, banana, okra, papaya, bittergourd & other crops could be saved if a drip irrigation system is employed for cultivation.

According to a Parliamentary committee report,

The Government of India has initiated several schemes for developing Micro Irrigation in India. They are

In the Union Budget 2021-22, Finance Minister Nirmala Sitharaman has doubled the allocation under MIF to INR 10, 000 crore.

About  Ministry of Agriculture and Farmers Welfare (MoAFW):