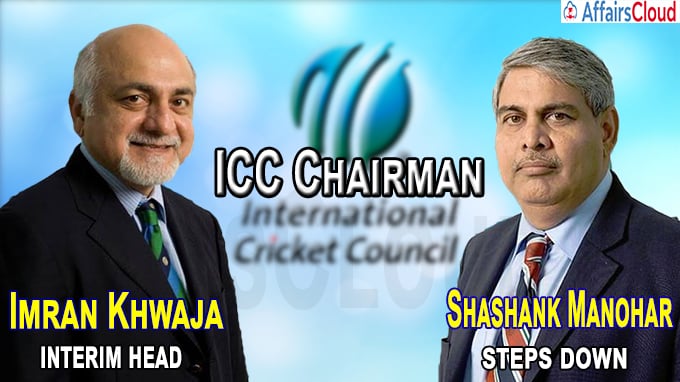 Shashank Manohar stepped down as International Cricket Council(ICC) chairman after his two 2 year tenure(4 years). He is the first independent chairman. His tenure ended on July 1, 2020. Deputy Chairman Imran Khwaja will take charge as interim chairman until the next chairman is elected.

i.Shashank Manohar was elected as ICC’s first independent Chairman in May 2016.

ii.He was also elected to the Board of Control for Cricket in India (BCCI) vice-president in 2005 and elevated as President in 2008.

i.Imran Khwaja is the former president of the Singapore Cricket Association. He was elected as ICC’s deputy chairman in 2017.

ii.Currently he is a part of many committees, including the Finance & Commercial Affairs, Nominations, Development (chair) and Membership.

i.According to the ICC rules, Shashank Manohar can stay for another two-year term as a maximum of three terms are allowed.

ii.The election process of selecting the next chairman is likely to be approved by the ICC board soon.