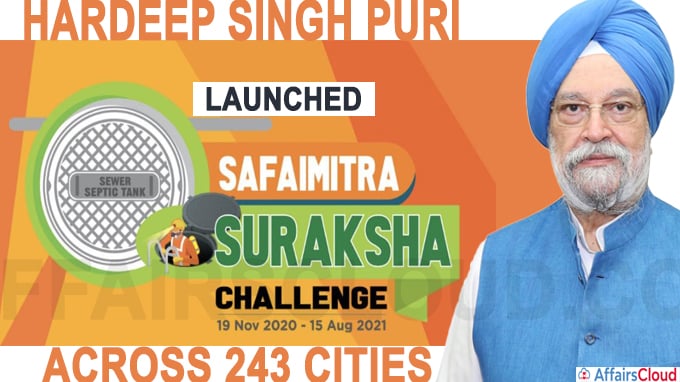 The occasion of World Toilet Day i.e. on November 19, 2020, was observed by the Ministry of Housing and Urban Affairs (MoHUA) and Ministry of Jal Shakti with a launch of Safaimitra Suraksha Challenge and conferring of Swachhata Awards 2020 on the 20 best performing districts, respectively.  Both events are detailed as below:

Minister of State (MoS), Independent Charge (I/C) Hardeep Singh Puri, Ministry of Housing and Urban Affairs (MoHUA) launched a Safaimitra Suraksha Challenge at a webinar in New Delhi where pledge has been taken by senior officials representing 243 cities to mechanize all sewer and septic tank cleaning operations by 30th April 2021. They also gave their commitment to work towards preventing any deaths from hazardous entry.

Reason behind this launch:

The Prohibition of Employment as Manual Scavengers and their Rehabilitation Act (2013) and various judgements of Supreme Court (SC) prohibit hazardous cleaning, i.e. manual entry into a septic tank or sewer without protective gear and observing operating procedures Despite this, recurring episodes of human fatalities continue. Therefore, to counter this situation, this decision has been taken.

The Challenge will raise awareness among citizens on the above mentioned issue along with infrastructure creation for mechanized cleaning and capacity building of the workforce. Also, a dedicated helpline number has been set up to register complaints and provide real-time solutions on desludging or sewer overflow.

The event saw the launch of a series of advisories prepared by Central Public Health and Environmental Engineering Organisation (CPHEEO), MoHUA. These included the follows:

An Open Forum in the format of a panel discussion was also held on the subject of ‘Manhole to Machine Hole Transformation’ where several States and cities such as Uttar Pradesh (UP), Maharashtra, Surat, Hyderabad and Ludhiana shared their experiences and best practices.

Other Participants: The Webinar was also attended by Secretaries of Ministry of Social Justice, Department of Drinking Water and Sanitation, and Department for Promotion of Industry and Internal Trade, who spoke about how their Ministries were contributing to the cause of mechanizing such cleaning practices.

Department of Drinking Water and Sanitation (DDWS) organized the “Swachhata Awards 2020” during the World Toilet Day under ‘Swachh Bharat Mission – Grameen (SBMG)’ for promoting awareness on access to Safe Sanitation.

The Union Minister had a virtual interaction or Sarpanch Samvad with nine Sarpanches from ODF Plus Gram Panchayats where Sapanches shared their key activities such as SLWM, people’ participation and ODF Sustainability.

There was a screening of a short film on ODF Plus Film (Swachhata ke Paanch Mantra) which shows key components of ODF Plus in a creative format.