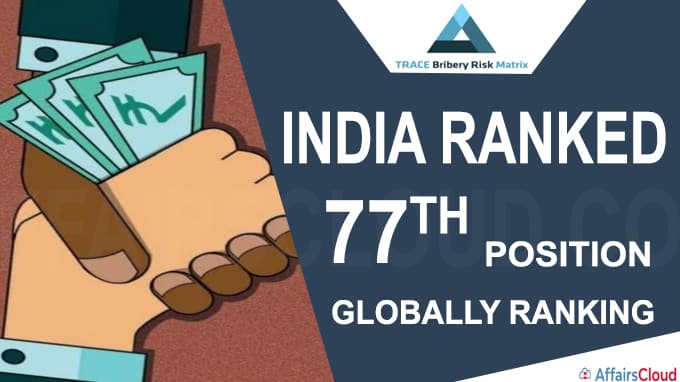 A global list of measuring business bribery risks “The 2020 Global TRACE Bribery Risk Matrix” was released by an anti-bribery standard setting organisation TRACE International,  featuring 194 countries, territories, and autonomous and semi-autonomous regions. In accordance with the Matrix, India is at 77th position with a total risk score of 45 as compared to the 78th position in 2019 with a score of 48.

The ranking and scores are premised upon the four domains and 9 nine subdomains of potential business bribery risk.  The 4 domains are as follows:

–India performed better than its neighbouring countries of Pakistan, China, Nepal and Bangladesh but lacked behind Bhutan, which secured 48th rank with a score of 37.

–Apart from India, Peru, Jordan, North Macedonia, Colombia and Montenegro also have a score of 45.

–The matrix aggregates the relevant data obtained from leading international organizations’ including the United Nations (UN), World Bank, V-Dem Institute at the University of Gothenburg and World Economic Forum (WEF).

–This data is beneficial for companies to assess the likely risk of bribe demands in each country as they can design customized compliance programs concerning that risk.

Initiated in 2014, it was originally developed in collaboration with California, United States (US) RAND Corporation to provide information about the risks of commercial bribery worldwide with an intention to update it every two years. Now, it is updated annually by TRACE.