Sabka Vishwas legacy dispute resolution scheme for taxpayers announced by finance minister Nirmala Sitharaman in the 2019-20 union budget has started off with its operation from September 1, 2019, and will be operational till December 31, 2019. 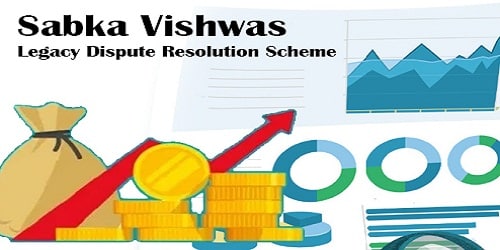 Key points
Aim: The scheme aims to free taxpayers in closing their pending disputes related to legacy Service Tax and Central Excise cases which are now included under Goods and Service Tax(GST).
Two components: The two main components of the scheme are Dispute resolution and Amnesty (pardoning of cancelling offence).

Dispute resolution:
It functions in Dissolving the legacy cases of Central Excise and Service Tax included in GST and taking legal actions at various forums.

Amnesty:
This component gives the taxpayer an opportunity to pay the outstanding tax, avoiding any consequence under the law and relieved considerably in certain features like the waiver of interest, penalty.

Relief facility:  The taxpayer is relieved based on the following circumstances,
i.Pending cases: 70% relief from the duty demand if an amount less than or equal to Rs. 50 lakh whereas it is 50% if it is more than Rs. 50 lakh.
ii.Non pending cases: 60% relief of the confirmed duty amount for a sum less than or equal to Rs. 50 lakhs whereas it is 40%, if the confirmed duty amount is more than Rs. 50 lakh.
iii.voluntary disclosure: The person availing the Scheme will only have to pay the full amount of disclosed duty.