The 7th meeting of SAARC Immigration Authorities was held in Islamabad, Pakistan on August 2. The meeting was chaired by Pakistan’s Director General Immigration and Passports Usman A. Bajwa.

The South Asian Association for Regional Cooperation (SAARC) is regional intergovernmental organization and geo political union in South Asia. Its member states include Afghanistan, Bangladesh, Bhutan, India, Nepal, the Maldives, Pakistan and Sri Lanka. It was founded in Dhaka in 1985. Its secretariat is based in Kathmandu. 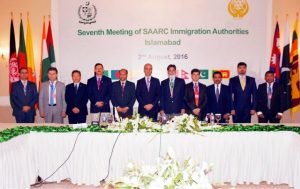 Indian-Occupied Kashmir became the hot topic at dais amid killings of over 50 innocent Kashmiri youth at the hands of Indian forces.

It is noted that Indian Internal Minster put forward many applaudable points such as,