UN Secretary-General Ban Ki-moon has been honoured with Russia’s Order of Friendship by Russian President Vladimir Putin and the honour was published on the Russian official legal information site.

About Order of Friendship Award: 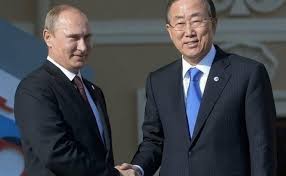 State beautification of the Russian Federation

Purpose:  To award foreign nationals whose work, deeds and efforts were aimed at the betterment of relations with the Russian Federation and its people

For special services in the strengthening of peace, friendship, cooperation and understanding among peoples, honor Ban Ki-moon, Secretary-General of the United Nations, citizen of the Republic of Korea, with the Order of Friendship

About Awardee and his contribution:

Among those awarded are: