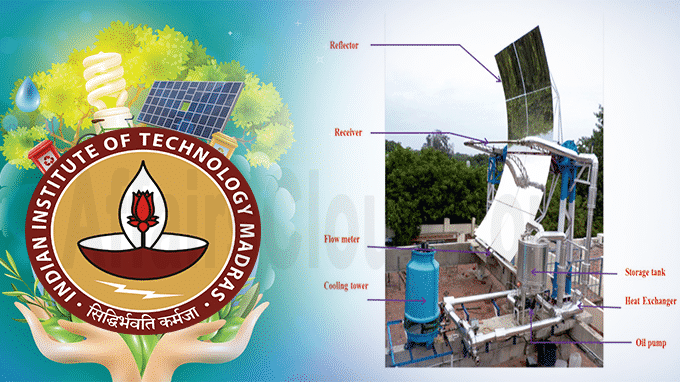 On May 21, 2020, Researchers at the Indian Institute of Technology-Madras (ITT-M), has developed a solar ‘parabolic trough collector’ (PTC) system for concentrating solar energy for industrial applications like desalination, space heating and space cooling.

ii.About PTC: The PTC is lightweight and has been developed to have high energy efficiency. It is designed to function under India’s various climatic and load conditions.

iv.The ‘Trough Collector’ focuses sunlight on a small area where it is absorbed and then utilised for heating and subsequently into energy generation. This system consists of a concentrator or reflector, receiver, supporting structures like pylon, torque tube, mirror supporting arm and receiver support and a tracking unit.

vi.Target: The concept also follows the Centre’s National Solar Mission which has set a target of providing 20,000 MW (Megawatt) solar power by 2022.

vii.K Srinivas Reddy, IIT-M professor also added that solar energy is a most propitious technology for clinching sustainability in the energy domain and solar power technology can meet thermal and electrical energy demands due to its high reliability.

viii.States such as Bihar, Haryana, Madhya Pradesh, Maharashtra and Gujarat have great potential to harness this energy, which can reduce the combustion of non-renewable and polluting sources of energy such as coal and petroleum.