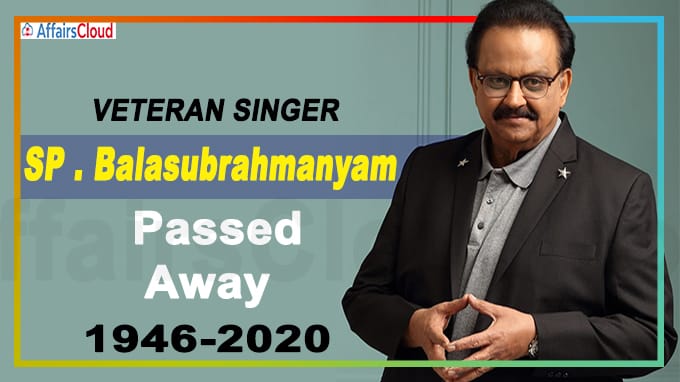 On September 25, 2020 Renowned Indian Singer Sripathi Paditha Arathyula Balasubrahmanyam (Popularly known as SPB) passed away in Chennai at the age of 74 due to Cardio-Respiratory arrest.

He was admitted to hospital after testing positive for COVID-19. Even Though he tested Negative on September 4, he continued to be on Ventilator and ECMO support, and breathed his last on September 25.

ii.SPB made his singing debut in 1966 in the Telugu Movie ‘Sri Sri Sri Maryada Ramanna’.

iv.Apart from Singing, he was also a Dubbing Artist, Singer, Film Producer, and Music Director.

iii.In 2016, He was awarded with Indian Film Personality of the Year consisting of a Silver Peacock Medal by International Film Festival of India (IFFI).

Civilian Honours by Government of India:

i.He was awarded Padma Shri in 2001 by the Government of India.

ii.In 2011, he was awarded Padma Bhushan by the Government of India.