Real Madrid’s Cristiano Ronaldo won the Best Player of the Year along with Goodwill Award at the seventh edition of the 2016 Globe Soccer Awards held in Dubai on December 27, 2016. 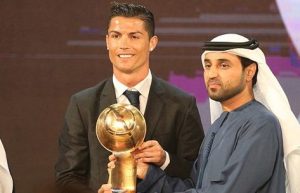 Cristiano Ronaldo was born on 5 February 1985. He is a Portuguese professional footballer who plays for Spanish club Real Madrid and the Portugal national team.

Fernando Manuel Fernandes da Costa Santos was born on 10 October 1954. He is a retired Portuguese footballer who played as a defender, and the current manager of the Portugal national team.

Florentino Pérez was born on 8 March 1947. He is a Spanish businessman, civil engineer, former politician, and current president of Real Madrid Club Federation as well as Grupo ACS, a civil engineering company.

The Globe Soccer Awards are awards for the best club director and the best agent of the year, together with other excellences in the football context.