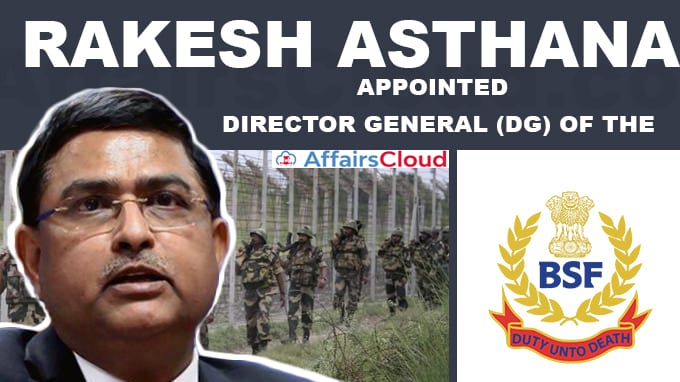 On 17th August 2020, the Appointments Committee of the Cabinet (ACC) headed by Prime Minister Narendra Modi approved the appointment of Rakesh Asthana, Gujarat cadre IPS officer of 1984 batch as the Director General (DG) of the Border Security Force (BSF), along with the Director General of Narcotics Control Bureau (NCB) till 31st July 2021– the date of his superannuation.his superannuation date.

i.Asthana has been serving as the DG of the Bureau of Civil Aviation Security (BCAS) since November 2018.

ii.He served as the Special Director of the Central Bureau of Investigation(CBI) till 2018.

i.VSK Kaumudi, Andhra Pradesh cadre IPS officer of 1986 batch currently serving in the Bureau of Police Research & Development (BPR&D) was appointed as the Special Secretary (Internal Security) in the Ministry of Home Affairs till November 30, 2022, his superannuation date.

ii.Jawed Akhtar, Uttar Pradesh Cadre IPS officer of 1986 batch, who is currently serving as the special DG of Central Reserve Police Force (CRPF) is appointed as the DG of Fire Services, Civil Defence and Home Guard following the superannuation of Nageshwar Rao, who became the interim Chief of CBI following the forced leave of  Mr. Alok Kumar Verma and Mr. Asthana