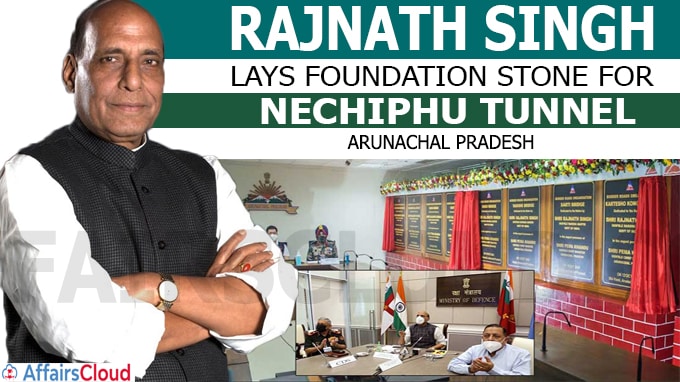 On October 12, 2020 Rajnath Singh, Union Defence Minister virtually inaugurated 44 bridges, built by Border Roads Organisation (BRO) across 7 States/UTs(Union Territories) in border areas. Most of these bridges are in strategically important areas and will help armed forces to ensure quick movement of troops and weapons. He also laid the Foundation Stone for 450 meters long, ‘Nechiphu Tunnel’, a bi-lane tunnel, on the road to Tawang in Arunachal Pradesh.

He also announced that the government has sanctioned high altitude clothing to BRO engineers and workers.

Gen Bipin Rawat, Chief of Defence Staff; Gen MM Naravane, Chief of Army Staff among others participated in the ceremony through video conference.

The 44 bridges are of various spans ranging from 30 meters to 484 meters.

i.The bridges provide connectivity to remote areas and are of strategic importance

ii.It has been designed to ease the movement of heavy civil & military traffic in border areas(Western, Northern and North East sectors)

iii.In accordance with the vision of Prime Minister Shri Narendra Modi, the bridges contribute to the  overall economic development of remote border areas and will also help to quickly deploy the Armed Forces in strategically important areas.

The 8 bridges in Ladakh, that were built at a cost of 45 Crore are on 4 strategically important roads close to Line of Control on West and Line of Actual Control on East in Ladakh region.These bridges are built by BRO projects Vijayak and Himank.

The strategically important tunnel will ensure all weather connectivity across Nechiphu Pass. It will also provide a safe and secure passage through accident prone areas.

i.BRO, apart from expediting road construction, has completed 28 major bridges in 2019, while 102 major bridges are being completed in 2020. Of these 54 bridges have already been completed.

ii.BRO, in order to meet immediate requirements of armed forces and people living in remote areas has also constructed more than 60 Bailey Bridges

Out of the 7 projects, 4 are related to water supply, two for Sewerage treatment and 1 for Riverfront