On August 11, 2019 veteran journalist and consulting editor at India Today TV(television), Mr. Rajdeep Sardesai was awarded the 2019 Prem Bhatia Award for his Outstanding Political Reporting with a career spanning over three decades. 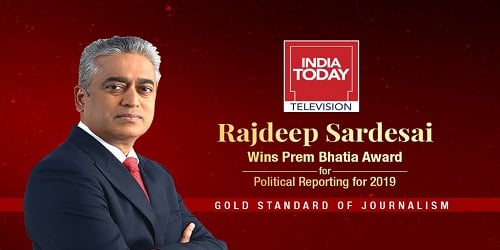 Key points
i. He was honoured with the award in an event held by Prem Bhatia Memorial Trust at the India International Centre in New Delhi.
ii. Sardesaiwas also recipient of the Padma Shri (2008), the Ramnath Goenka award for journalist of the year (2007) and International Broadcasters’ award for his coverage in the 2002 Gujarat riots.
iii. He had also authored two books. They are ‘Newsman: Tracking India in the Modi Era’ and ‘Democracy’s XI: The Great Indian Cricket Story’.
iv. The annual lecture in the event was delivered by former Chief of Naval Staff, Admiral Arun Prakash.

About the Prem Bhatia award:
A cash prize of Rs.2lakh will be awarded for the awardees in memory of veteran journalist Prem Bhatia, who was well known for his political reporting.

Two awards:
i. Journalists are awarded in two categories. They are