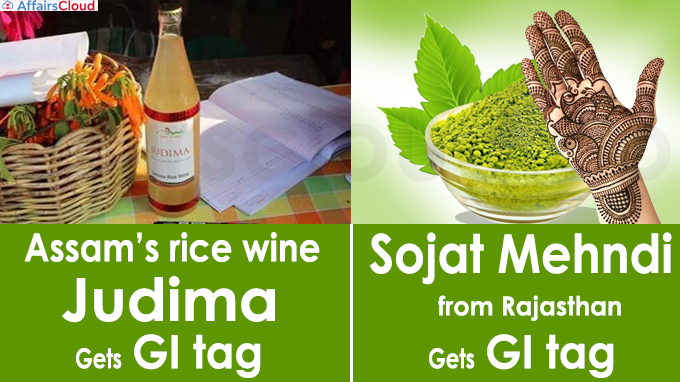 Sojat Mehndi from Rajasthan, known for its medicinal values has received the Geographical Indication (GI) tag. From the North East States, the traditional brew of Dimasa community, Judima from Assam and Naga Cucumber from Nagaland known for its high potassium content also bagged GI tags.

About GI Tag
i.A GI is a sign used on products that have a specific geographical origin and possess qualities or a reputation that are due to that origin.
ii.GI are part of the intellectual property rights that comes under the Paris Convention for the Protection of Industrial Proper.
iii.In India, GI registration is done by the Geographical Indications of Goods (Registration and Protection) Act of 1999.
iv.Registrations for geographical indications will remain valid unless the registration is cancelled. Geographical indications registered as collective and certification marks are generally protected for renewable ten-year periods.

Objective – GI Tag helps the genuine producers to avail optimum price for their premium goods even in the competitive market.

Rajasthan’s Sojat Mehndi
i.It originates from mehndi leaves grown in Sojat.
ii.They are cultivated naturally by rainwater for getting high lawsone content in leaves.
iii.Sojat tehsil of the Pali district in Rajasthan has several natural factors which are favourable for the crop, such as geological structure, topography, drainage system, climate, and soil.
iv.Fragrant oil is also extracted by drying the leaves and all parts of the plant have medicinal value.
About Rajasthan
Chief Minister: Ashok Gehlot
Tiger Reserves: Sariska Tiger Reserve in Alwar, Mukundara Tiger Reserve in Kota and Ranthambore Tiger Reserve in Sawai Madhopur.

Assam’s rice wine, Judima
The traditional drink of Dimasa community, Judima, the wine brewed by them in Assam, was awarded the geographical indication (GI) tag.

Nagaland’s Cucumber
The Nagaland’s Cucumber which are juicy, soft and sweet taste and grown organically, was granted the Geographical Indication (GI). It is known for its sweetness and distinctive green colour, and they contain low calories and high Potassium.