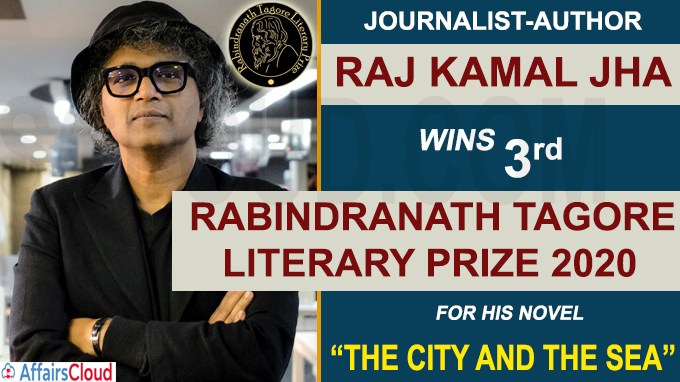 His Majesty Sultan Qaboos bin Said Al Said, late Sultan of Oman and The People of Oman and Sandip Soparrkar a renowned dancer choreographer from India named as the winner of TagorePrize for Social Achievement 2020.

Due to COVID-19 pandemic, The name of the winners were announced virtually on December 7th 2020 from  Copenhagen, Denmark.

ii.The previous winners received USD 10,000, the amount was decreased due to COVID-19 pandemic.

About ‘The City and the Sea’

i.His Majesty Sultan Qaboos bin Said Al Said named as the winner of the prize for his peacemaking efforts.

ii.Rabindranath Tagore statuette will be awarded to his successor His Majesty Haitham bin Tariq Al Said, Sultan of Oman.

iii.Sandip Soparrkar from India named as the winner of this prize for his contribution to the betterment of society through his initiative ‘Dance for a Cause’.

ii.In 2019, the prize was split into 2 fold as Literary Prize and Social Achievement Prize

On 7th November 2020, the book “Moustache” (original Malayalam title – “Meesha”) authored by Malayalam writer S. Hareesh and translated to English by Jayasree Kalathil won the JCB Prize for Literature 2020 worth Rs.25 lakhs. The book was published by HarperCollins India in 2020. This is the 2nd Debut novel and 2nd Malayalam Translation to Win the JCB prize for Literature.