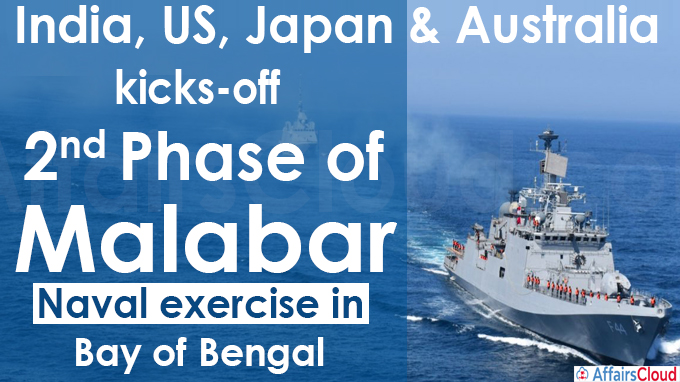 On 12th October 2021, QUAD countries – India, Australia, Japan & USA started the second phase of the 25th edition of joint Naval exercise ‘Malabar 2021’ in the Bay of Bengal region. The 3-day long naval exercise is aimed at building coordination & interoperability among the navies that was established during the 1st phase.

i.In the 2nd phase the Indian side is represented by INS Ranvijay, INS Satpura, P-8I long-range maritime patrol aircraft, and a submarine.

Note – The 1st phase of 2021’s Malabar exercise was hosted by the US Navy in August near the Guam Islands in the Pacific Ocean.

i.QUAD or Quadrilateral Security Dialogue is a grouping of 4 countries – India, Australia, Japan & USA, that was initially established in 2007 under the proposal of Japanese PM Shinzo Abe.

ii.Later in the 2017 ASEAN Summit, the 4 countries agreed to revive the QUAD alliance.

Government set to Sell the Subsidiaries of Air India