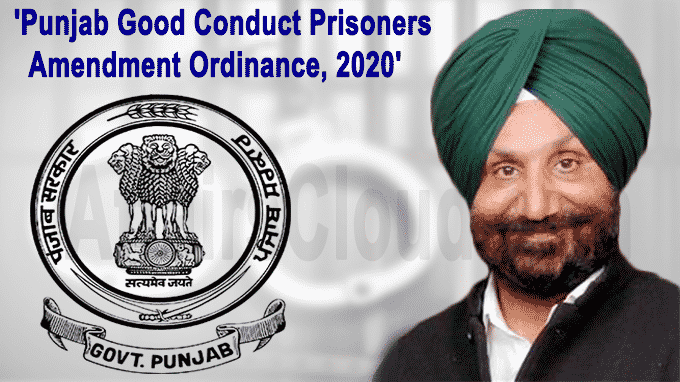 On May 17, 2020, Punjab government (govt) promulgated ‘The Punjab Good Conduct Prisoners (Temporary Release) Amendment Ordinance, 2020’. As per new provisions, the temporary release of the prisoners has been allowed beyond the maximum period of 16 weeks in a calendar year.

i.Sukhjinder Singh Randhawa, Chandigarh, Cooperation and Jails Minister, announced that the measures have been taken in view of containing the spread of COVID-19, with the intention to decongest the jails.

ii.The condition of the temporary release being availed of, on quarterly basis also stands waived.

iii.The Punjab Government in March 2020, had given parole or interim bail to around 6,000 prisoners in order to decongest the jails across Punjab to combat COVID-19.

v.The decision was taken by the Government panel, chaired by Justice Rakesh Kumar Jain of the Punjab and Haryana High Court who is also the Executive Chairman of Punjab State Legal Services Authority.

vi.The panel noted that readmitting of such a large number of undertrials back in the jails has massive risk & can defeat the entire purpose of releasing them. It suggested that the concerned judicial officers should extend the interim bail by another six weeks or further till the notification under the Epidemic Diseases Act, 1897, remains in force.

The government panel had recommended to carry out amendment in ‘The Punjab Good Conduct Prisoners (Temporary Release) Act, 1962’ to enable the release of convicts on parole for more than six-week in a calendar year, the Government has taken the decision by introducing an ordinance.