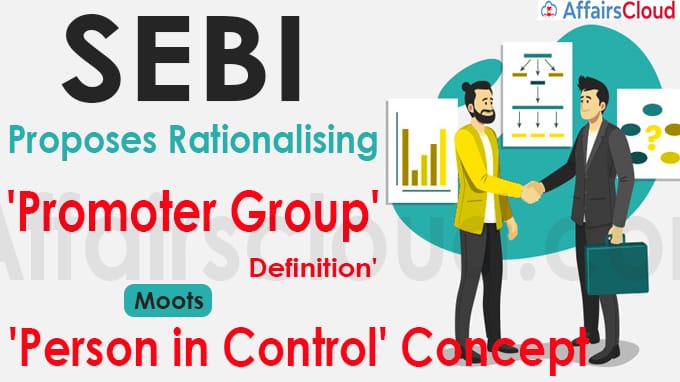 As the concept of promoters is losing its relevance in India, the Securities and Exchange Board of India(SEBI) reviewed the regulatory framework of the promoter, promoter group and group companies as per SEBI (Issue of Capital and Disclosure Requirements(ICDR)) Regulations, 2018 with certain proposals.

a.The shifting of the concept of ‘promoter’ to ‘person in control’:

i.Definition of Promoter: Companies Act, 2013 and SEBI (ICDR) Regulations, 2018 define a “promoter” as a person who has been named as such in the offer document or in the annual return of the issuer or a person who has control over the issuer (directly or indirectly) or in whose advice, directions or instructions the board of directors of the issuer is accustomed to act.

ii.SEBI stated the definition of the promoter is wide-ranging and goes beyond persons in control of the issuer and proposed the shifting of the concept of a promoter to a person in control.

b.Rationalization of the definition of ‘Promoter Group’

i.According to the Regulation 2(pp) of the ICDR 2018 of the SEBI, Promoter group is a group of individuals or companies or combinations thereof acting in concert, which holds 20 percent or more of the equity share capital in that body corporate

ii.SEBI mentioned the definition of the ‘promoter group’ as focusing on capturing holdings by a common group of individuals or persons and often results in capturing unrelated companies with common financial investors, hence removing it.

i.The current lock-in period of 3 years for minimum promoters’ contribution (20 percet) has been proposed to reduce to 1year – Only in the case if the objective of the issue is concerning offer for sale or something related to financing, other than for capital expenditure for a project.

ii.Promoters’ holding above minimum promoters’ contribution to be locked in from the date of allotment in the Initial Public Offer(IPO) is changed from 1 year to 6 months.

iii.The entire pre-issue capital held by persons other than the promoters shall be locked in for 6 months from the date of allotment in the initial public offer (existing requirement is 1 year)

Note – IPO is the selling of securities to the public in the primary market.

On April 06,2021, SEBI modified its framework relating to the guidelines on contribution to set up Limited Purpose Clearing Corporation (LPCC) by Asset Management Companies (AMCs) of Mutual Funds(MFs).

About Securities and Exchange Board of India(SEBI):