The Prime Minister of Portugal, Antonio Costa was on a seven-day long official visit to India from January 6 to January 12, 2017. Costa who traces roots from Goa was accompanied by several ministers.

India and Portugal signed 7 MoUs on January 7, 2017 in New Delhi to deepen bilateral ties between the two economies. 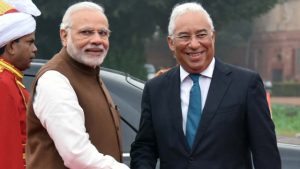 India & Portugal to Work out Co-Production Agreement in Film Sector

Recognising the cultural significance of India’s film industry and its growing interest in Portugal, visiting PM agreed to facilitate enhanced collaboration to make Portugal a preferred filming destination for the industry. The agreement would be framed in a time-bound manner keeping in mind the legal aspects.

Visiting PM Antonio Costa concluded his visit with a two day trip to Goa from January 11 to January 12, 2017 during which he visited his ancestral house in Margao City in South Goa and attended a host of events in the coastal state.