On August 30, 2019, The Prime Minister (PM) of India, Shri Narendra Modi conferred Yoga awards for the year 2019 to the winners of PM’s Award for Outstanding Contribution for Promotion and Development of Yoga at New Delhi. Winners were announced during the International Day of Yoga, on June 21, 2019 at Ranchi, Jharkhand along with the 2 winners of 2018 in an event organized by the Ministry of Ayurveda, Yoga & Naturopathy, Unani, Siddha and Homoeopathy (AYUSH). Winners were selected under different categories out of 79 nominations for 2019 and 186 nominations for 2018. 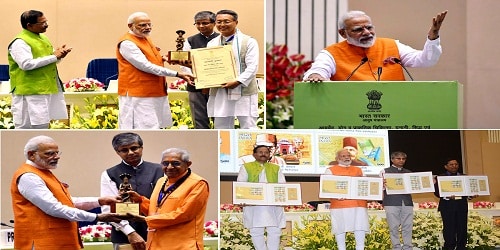 Winners of the year 2019 Yoga Awards are as follows:

Winners of 2018 Yoga Awards are as follows:

Prize money
Each of them will be felicitated with a Cash Award of Rs. 25 lakh, Trophy and a Certificate.

AYUSH HWCs
i. The Prime Minister Modi launched 10 AYUSH Health and Wellness Centres (AYUSH HWCs) located in Haryana.
ii. Government has set a target of setting up 12,500 Ayush centres across India, to be functional in next 3 years, 4000 of which will be set up in 2019.