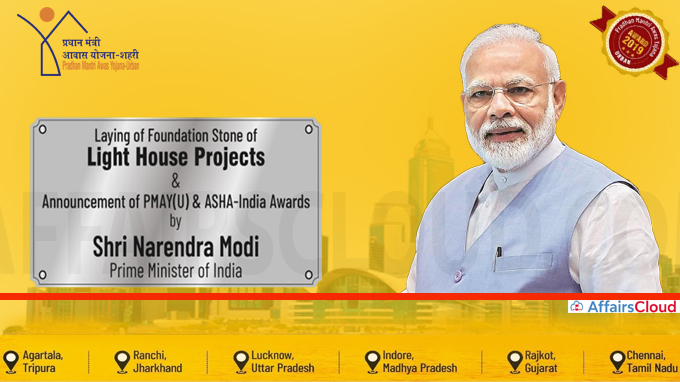 –The LHPs will showcase the best use of new-age alternate global technologies, processes and materials in the construction sector at such a large scale for the first time in the country.

–These houses will be more economical, sustainable, durable and of high quality in comparison to the conventional brick and mortar construction.

Technologies to be used:

The PM gave away annual “Pradhan Mantri Awas Yojana (Urban) Awards-2019” for excellence in six categories for the implementation of PMAY-U.The PMAY(U) awards were instituted by the Ministry of Housing and Urban Affairs (MoHUA) in 2019.

Other Launches by PM:

–A Compendium of 54 innovative housing construction technologies which were identified through GHTC-India was released.

–Under PMAY-Urban scheme, 1.09 crore houses had been sanctioned against the demand of 1.12 crore houses, 40 lakh houses handed over to beneficiaries, and 70 lakh more houses were under construction.

–The year 2019-20 was declared as the ‘Construction Technology Year’.

i.Over the next 5 years (NIP Plan Period) i.e. by 2025, the debt platform is expected to raise enough resources to support the construction of infrastructure projects worth Rs.100,000 crore.

ii.Larsen & Toubro (L&T) has emerged as the lowest bidder with Rs.3166 crores for the construction of the 20 kilometer(km) 4 lane road bridge across River Brahmaputra connecting Dhubri of Assam to Phulbair of Meghalaya on National Highway(NH) 127B. This will be India’s longest Bridge over a River in the northeast.