On March 8, 2020 President Ram Nath Kovind honoured 15 women with ‘Nari Shakti Puraskar’(Women Shakti Award) for 2019 at Rashtrapati Bhawan, New Delhi. The award is conferred annually to eminent women and institutions in recognition of their service towards the cause of women empowerment & social welfare. 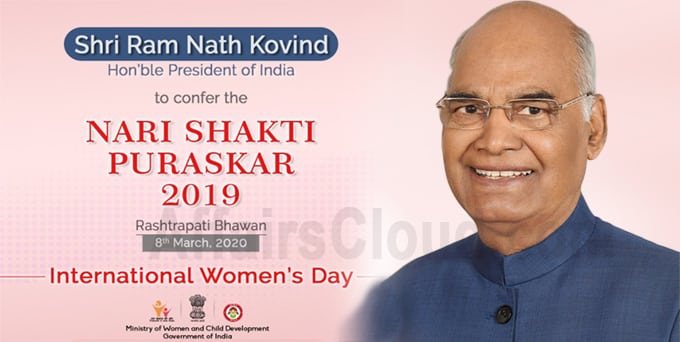 i.This award is an initiative of the Ministry of Women and Child Development(MWCD) to acknowledge the achievements of women for the nation & recognize their contributions towards society.

iii.Awardee Bhageerathi Amma appointed a person on her behalf to receive the award due to her health issues.

About ‘Nari Shakti Puraskar’:
It was established in 1991 by MWCD & 1st awarded in 1999. Every year on the occasion of  International Women’s Day the award is conferred by the President of India. It is considered as the National Award for Women.