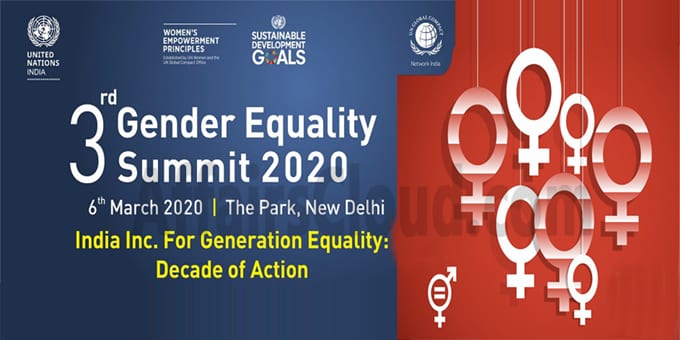 i.The summit, aims to create a strong roadmap towards gender equality at workplaces in India, focuseson driving and bringing in change for equal opportunities in employment and growth for the women skill workforce.

ii.The summit also coincides with the International Women’s day (March 8), and consequently linked the international theme with the Indian context to underscore the present generation as a main role and the India Inc as a key catalyst for gender equality.

The paper showcases that, the estimated income of Female workforce in India is a just one-fifth of male income & is also among the world’s lowest (144th ) one.

Just only 14 % of leadership position (136th rank) was comprised by Indian women and also 30 %  of them involved in professional and technical areas. In 2018, about 39% of the women workforce witnessed, but held only 27 % of managerial positions.

India is the only nation among the 153 countries, which accounted economic gender gap (35.4 %) is larger than the political gap (41.1 per cent)
The talent force LGBT (lesbian, gay, bisexual, trans) community witnessed as main catalyst in the coming years.

The employed women who are working in agriculture, forestry and fisheries accounted 38.7% in global level but only 13.8 % of landholders are women.
About15 million girls & 10 million boys of primary school age are out of school.

Here are the winners: