The President of India, Shri Pranab Mukherjee presented the Rajbhasha awards on the occasion of Hindi Divas at a function held in New Delhi. The award ceremony held at Vigyan Bhawan.

These awards had been instituted by the Department of Official Language of Ministry of Home Affairs to recognize the excellent contribution of Ministries, Departments, Nationalized Banks and others in the field of Hindi. 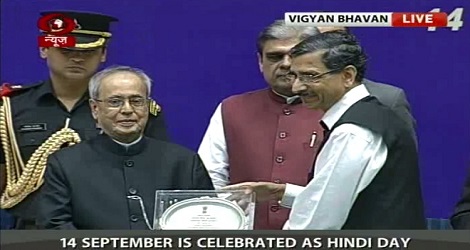 SK Biswas, Director (Personnel), THDCIL, has been honoured with the prestigious Rajbhasha Kirti Award (third) the award from President Pranab Mukherjee at a glittering ceremony.

–        The decision of using Hindi language as an official language of India was legalized by the Constitution of India on 26th of January in 1950.

–        Hindi is spoken as a native language by 258 million people and is recognized as the 4th largest language in the world.

–        Hindi got its name from the Persian word Hind, meaning ‘Land of the Indus River‘.