Bankers Chanda Kochhar and Arundhati Bhattacharya have been ranked as top two in a list of most powerful women in Asia-Pacific prepared by the global magazine Fortune.

The list includes key executives from over six countries in the region. With 11 names, Chinese women lead the list. 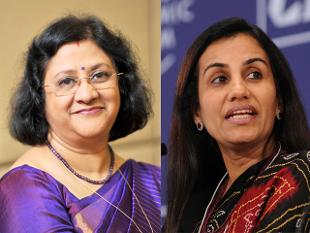 Bhattacharya (59), chairman of the State Bank of India, whose ranking has also moved up from the fourth spot she was at last year. She is thefirst woman to head the 209-year-old state Bank of India. She played a crucial role in ‘modernising the organisation.

Vasudeva (59) Chairman and Managing Director of Hindustan Petroleum Corporation, has made it to at fifth rank. She is the first lady to head an Indian oil company. The company made a record profit of $245 million last year, up 37 per cent, despite a global oil glut.

Sharma (56) Managing Director and chief executive of Axis Bank came in at the ninth spot in the list. Axis’ profit increase 18.3 per cent, to around $1.1 billion, in the year ending in March.

Singapore-based chief executive of International Goldman Sachs Asset Management, Sheila Patel, has also made it to the list at the 23rd position.