On September 9, 2018, President Ram Nath Kovind returned from his 8 day 3 nation tour to Cyprus, Bulgaria and Czech Republic that commenced from 2nd of September.

Highlights:
i. This was his first overseas state visit in the second year of his presidency.
ii. The timeline of the official tour of the President is as follows:

iii. He was accompanied by Minister of State for Agriculture and Farmer’s Welfare and Panchayati Raj, Shri Purushottam Rupala Ji and Hon’ble members of Parliament Shri Sunil Kumar Singh Ji and Shri Ram Shakal along with other senior government officials.

On September 2, 2018, President Kovind reached Cyprus and started his 2 day tour till September 4, 2018 at the invitation of the President of Cyprus, His Excellency Mr. Nicos Anastasiades. 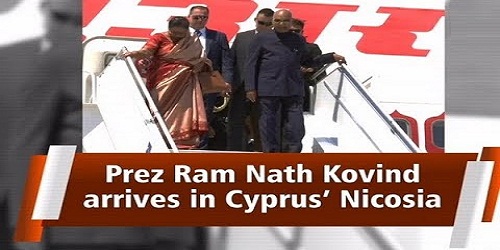 President of India addressed the University of Cyprus:

On September 4, 2018, President Kovind was received by Deputy Prime Minister of Bulgaria Ivo Hristov and met the President of Bulgaria Rumen Radev and the First Lady at Sofia, Bulgaria.
The visit to Bulgaria is taking place after a gap of 15 years.

Meeting with the President of Czech Republic  Milos Zeman:
On September 7, 2018, President Kovind met his counterpart Mr. Milos Zeman.
i. They held talks on the topics of : in the fields of defence, technology and manufacture, business and trade and terrorism.
ii. 5 MoU s were signed between India and Czech Republic . They were:

iii. Another Mou is being worked out in the field of civil nuclear energy between Global Centre for Nuclear Energy Partnership, Jhajjar, Haryana, and a relevant Czech institution.
iv. He also acknowledged the government’s efforts for mobility of high-skilled Indian workers and business executives on a long-term basis.
v. Initially limited to 500 visas a year, the new procedure will come into effect in October 2018.