We are here for you to provide the important Current Affairs September 10 2018 which have unique updates of all daily events from all newspapers such as The Hindu, The Economic Times, PIB, Times of India, India Today, Indian Express, Business Standard, all Government official websites. Our complete current affairs helps you to get more marks in Banking, insurance, UPSC, SSC, CLAT, Railway and all other competitive Exams. 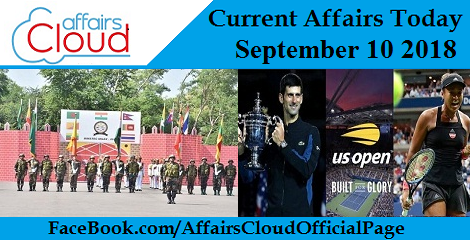 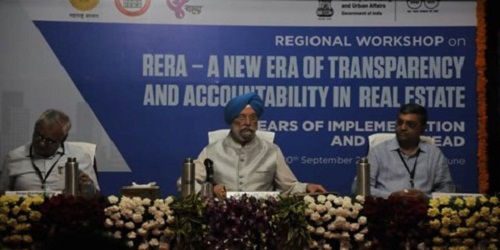 Objective:
To provide positive solution to the problems of home buyers.
About Real Estate Regulatory Authority (RERA):
i. It was launched in 2016 is aimed at consumer protection, by creating an online system for information sharing in the real estate sector.It has been established under the Real Estate (Regulation and Development) Act, 2016.
ii. It allows states to set up the Regulatory Authority and the Appellate Tribunal for transparency.
iii. Few Features of RERA are: 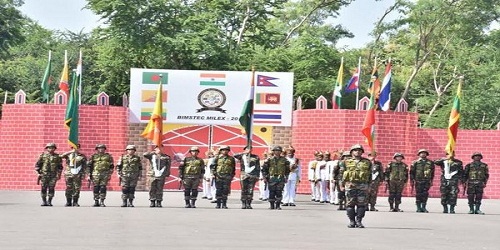 MILEX-18:
i. It will be held from 10 to 16 September 2018. Major General Sanjeev Sharma, General Officer Commanding, Golden Katar Division, India, was the Chief Guest for the Opening Ceremony.
ii. Aim of MILEX-18: to practice the BIMSTEC Nations in planning and conduct of counter terrorist operations.
iii. It will focus on learning best practices, team building & special tactical level operations in a counter-terrorist environment in semi urban setting.
iv. Participants: Armies of India, Bangladesh, Bhutan, Sri Lanka, Myanmar.
v. Nepal is not taking part in MILEX-18, owing to its policy of keeping equal distance from its neighbours, without being part of a regional bloc militarily.Thailand also send their Observers only.
About Bay of Bengal Initiative for Multi-Sectoral Technical and Economic Cooperation (BIMSTEC):
♦ Members – Bangladesh, Bhutan, India, Myanmar, Nepal, Sri Lanka andThailand
♦ Secretariat – Dhaka, Bangladesh 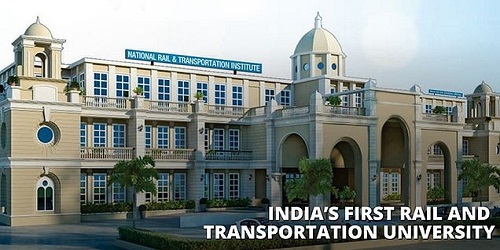 i. At present it is functioning at the National Academy of Indian Railways, Vadodara.
ii. It is funded by Ministry of Railways. University of California, Berkeley and Cornell University are its international partners.
iii. It offers two undergraduate courses: BSc Transportation Technology and BBA Transportation Managements.

Delhi Chief Minister Arvind Kejriwal Launches Doorstep Delivery Service of 40 services in Delhi
On 10th September 2018, Delhi Chief Minister Arvind Kejriwal launched the doorstep delivery of 40 services in Delhi.
Key Points:
i. To avail the services, citizens have to dial 1076 and place a request. They will be informed of the documents required.
ii. They can specify a time for a “Mobile Sahayak” to come and collect them. The services will be offered for an extra fee of Rs. 50.
iii. The services include: Passport help, caste certificates, income certificates, driving licence, ration card, marriage certificates, domicile and duplicate registration papers, water connection documents, etc.
iv. The government has involved VFS Global, a private company, to facilitate the services.
Some important stadiums in Delhi:
♦ Feroz Shah Kotla Stadium
♦ Dhyan Chand National Stadium
♦ Chhatrasal Stadium

Sadarmatt anicut, Pedda Cheruvu irrigation tank of Telangana: first from India to get Heritage Irrigation Structure status
Sadarmatt Anicut and Pedda Cheruvu irrigation tank of Telangana are the first from India to secure a place in the register of World Heritage Irrigation Structures (WHIS).
Key Points:
i. WHIS is maintained by the International Commission on Irrigation and Drainage (ICID). These 2 were among the 14 irrigation structures added to the list at the 69th International Executive Council (IEC) of ICID, held in Saskatoon, Canada, in August 2018.
ii. Sadarmatt Anicut was constructed across the Godavari River by French engineer JJ Ottley in 1891-92. It is located in the downstream of the Sriram Sagar irrigation project in Nirmal district.
iii. Pedda Cheruvu irrigation tank was built four centuries ago by rulers of Domakonda Samsthanam. It still supplies drinking water to Kamareddy town.
About International Commission on Irrigation and Drainage (ICID):
♦ President – Felix Britz Reinders
♦ Established – 1950
♦ Type – professional network of experts from across the world in the field of irrigation, drainage, and flood management

Bengaluru International Airport first in country to roll out facial recognition facility from 2019
On September 10, 2018, Bengaluru International Airport announced that roll out facial recognition facility for the passengers of some select airlines from 2019.
This makes BIAL the first aerodrome in the country to implement paperless air travel.
i. It has inked a pact with the Lisbon-based digital and biometric solutions services provider Vision-Box to implement the technology.
ii. This is a part of the DIgiYatra project to make boarding process paperless.
iii. Under this, for airport entry and boarding flights the passenger’s Aadhaar number and mobile phone will be used.
iv. The first few airlines involved with this are:  Jet Airways, Air Asia and SpiceJet .

iii. On September 5, 2018, President Ram Nath Kovind visited the Saint Alexander Nevski Square where he was received by President of Bulgaria Rumen Radev. They held bilateral discussions on political relations and building an economic partnership.
iv. On September 7, 2018, President addressed members of the India-Czech Republic Business Forum in Prague…………………………………..Click here to Read more

‘Sandbox’ method to be implemented for untested insurance products: IRDAI
On September 10, 2018, the Insurance Regulatory and Development Authority of India (IRDAI) announced the guidelines for ‘Sandbox’ method to enable testing of new innovative insurance products.
i.This was announced at the 11th Global Insurance Summit, organised by Assocham in Mumbai.
ii.The sandbox method would allow insurers or a set of few policyholders to test products in a particular geography before they are available in the market.
iii.This will allow further innovation of the insurance companies in insurance products.
iv.It also directed insurance firms to come out with long-term health insurance policies which are already implemented only in the two wheeler and four wheeler insurance segments.
IRDAI:
♦ Headquarters: Hyderabad.
♦ Chairman: SC Khuntia. 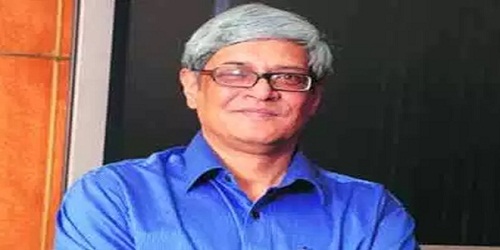 i. Bibek Debroy is also the Member of NITI Aayog.  Apart from Bibek Debroy two other corporate leaders were also conferred Honoris Causa. Hima Das – Sports Ambassador of Assam:
i. Hima Das has been made the sports ambassador of Assam, with a two-year contract of Rs 16 lakh per annum. This announcement was made at a function held to felicitate her recent achievements.
ii. Assam Chief Minister Sarbananda Sonowal also offered her a position of officer-level in the Sports and Youth Welfare directorate.
iii. Hima Das is 18 years old and hails from Assam.  She is the only Indian athlete to win a gold at any track event in the international level.
iv. She was handed cash award of Rs 1.6 crore for winning 2 gold medals one at the Asian Games 2018 and another at the IAAF World U-20 Championship 2018.
Some National Parks in Assam:
♦ Dibru-Saikhowa National Park
♦ Kaziranga National Park
♦ Nameri National Park 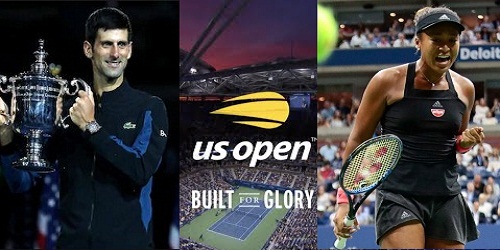 i. This book covers complex themes of women’s equality, gender, inclusion etc. It is published by Westland Books.