President of Indonesia, Mr. Joko Widodoi was on a three day visit to India from December 11-December 13, 2016, at the invitation of Prime Minister of India, Mr. Narendra Modi. 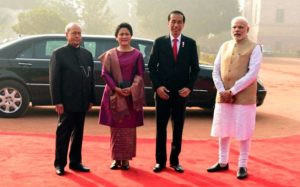 The Agreements Signed Includes:
i.MoU on Youth Affairs and Sports Cooperation.
ii.MoU on Standardization Cooperation.
iii.Joint Communiqué on on Ilegal and Unauthorised Fishing.

The agreement aimed to build a strong economic and development partnership to strengthen the flow of trade, capital and people between the two countries.