LPG connection to every family

Prime minister Narendra launched the Pradhan Mantri Ujjwala Yojana. He launched it on May 1st 2016 in Ballia, UP.

According to a WHO report, the unclean smoke inhaled by a women is like burning 400 cigarettes. In addition, women and children strain themselves to collect firewood.

The Government aims to safeguard the health of women and children by providing LPG to every household. For this purpose, it launched Pradhan Mantri Ujjwala Yojana. Under the scheme, the Government plans to provide 5 Crore LPG connections to BPL families 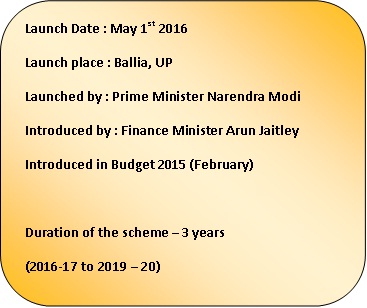 In addition, the Government plans to achieve this target in the next three years. Hence, the running duration of the scheme is from 2016-17 to 2019-20. The scheme estimates the cost of a single connection as Rs 1600. Therefore, for 5 Crore connections, it allocated Rs 8000 crores.

Above all, the Government provides the connection in the name of the woman member of the family. In addition, it also promises to transfer the subsidy amount directly to their bank accounts.

The government will identify the BPL families through Socio Economic Caste Census Data. The ‘Give It Up Campaign’

Prime Minister Narendra Modi launched the campaign on March 27th 2016. It urged the well – off to give up LPG subsidy so that the needy can use it. The campaign also aims at reducing the country’s energy imports to 10% by 2022.

Accordingly, the citizens who give up their subsidies have to buy LPG at market rates. Hence, with this the government gains Rs 324 from every “Give it up” consumer

With 15 million LPG connections, so far, 1 million consumers have given up their subsidies. Therefore, the net amount is 324 * 1 million. This amount will be used by the Government to implement the Pradhan Mantri Ujjwala Yojana.

The citizens who gave up their subsidies received a “Thanking letter” from the Prime Minister.

Source : The Times of India 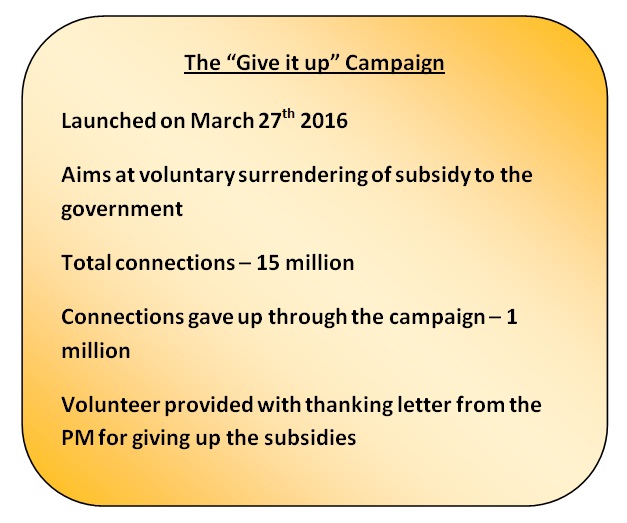 The UPA Government launched RGGLVY in 2009. Recently in 2015 the Narendra Modi Government discontinued its operations.

With RGGLVY, incidentally the Indian Oil Corporation topped the chart of distributors with 2, 187 distributors. Under RGGLVY

On the other hand, all these conditions are exempted from PMUY. The main motto is to serve the BPL population. Also the cost Rs 1, 600 covers the security deposit and the pressure regulator

Positive side of the scheme

The victory of the scheme lies in its reach to the deserving persons only. In order to achieve this challenge, it is highly important to identify the poor households. The Government is currently relying on Socio – Economic Caste Census data to identify the BPL population. However, this may not suffice the target.

Under Rajiv Gandhi Gramin LPG Vitaran Yojana, the consumers collect their cylinders from a dealer. In order to do so, they are now travelling a distance of 3 – 11 kms, that is the one way distance.

Sadly, PMUY has not included this particular problem in its agenda.

DBT is Direct Benefit Transfer. In other words, under DBT the government directly transfers the subsidy amount to the beneficiary. Unfortunately, under PMUY, the government depends on the oil companies for buying or importing of the LPG. This is actually the base. The material can reach the public only when it arrives at the right time.

The Government has not yet fixed the size of the cylinder that is to be delivered to the BPL households. While the urban population is enjoying 12 cylinders per year, on the other hand the rural hardly uses 4 per year. As discussed earlier the following are the available sizes of cylinders inside India

With “Give it up” campaign more than a million gave up their subsidies. Such voluntary actions can of course fetch funds at the beginning stages. However, this can never sustain for a long – term.

About 40% of the BPL households deprive the use of LPG. This is mainly bacause of lack of information of getting a connection. For this reason awareness creation and educating them about LPG connection and its use becomes mandatory.

Quiz on PMUY – Test Yourself