On 23rd September 2017, Union Minister of Petroleum and Natural Gas, Mr.Dharmendra Pradhan launched the ‘Pradhan Mantri LPG Panchayat’ in Mota Ishanpur village of Gujarat.
Pradhan Mantri LPG Panchayat:-
i.On this occasion, Mr.Dharmendra Pradhan handed over free LPG (Liquefied Petroleum Gas) connection to a beneficiary of PMUY (Pradhan Mantri Ujjwala Yojana) scheme.Gujarat Chief Minister Mr.Vijay Rupani was also present in the occasion.
ii.‘Pradhan Mantri LPG Panchayat’ will focus on spreading awareness among LPG users about the proper use and benefits of LPG.
iii.This Panchayat will act as an interactive forum for PMUY beneficiaries, officials, LPG distributors and NGOs (Non-Governmental Organisations).Under one Panchayat, around 100 LPG customers will be clubbed.
vi.The customers can share their experiences with others.The Panchayats will also discuss about safety practices, quality of service provided by distributors and availability of refill cylinders. 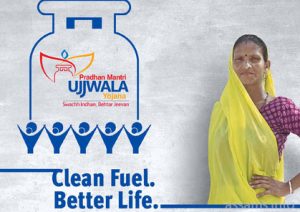 LPG distribution centres :-
i.Mr.Pradhan said that LPG connection has empowered women and has ensured their safety. As, lakhs of women have died due to health complications from usage of firewood as a fuel.
ii.One lakh LPG Panchayats are to be formed all over India.Mr.Pradhan said that 40 % of PMUY beneficiaries in Gujarat are Tribals and Dalits.
iii.He said that 106 new LPG distribution centres have been formed in the last one and half years in Gujarat.
vi.He added that 319 new distribution centres are to be set up in Gujarat. This will provide employment to 5,000 people.
v.He also said that LPG connection has been provided to 8.5 crore households in India in a duration less than three years.