Focussing the MSME, MUDRA began its journey on 25th September 2014 as an NBFC (Non Banking Financial Company). With its high success rate, MUDRA was later claimed to act as an individual bank from 8th April 2015 over a proper legislation.MUDRA is one of the most topical flourishing initiatives of Government of India to strengthen the MSME (Micro Small and Medium Enterprises) sector. While big industrial houses endow with jobs to 1.25 Crore people, small entrepreneurs have given employment to 12 crore people (Quoted by PM Modi; The Hindu).

A portal called mudra.org.in was launched for the banks and other finance institutions to directly feed their achievement details as consolidated reports.The progress of PMMY is monitored by SLBC (State Level Banker Committee) at state level and at national level is under direct control of the Finance Ministry. 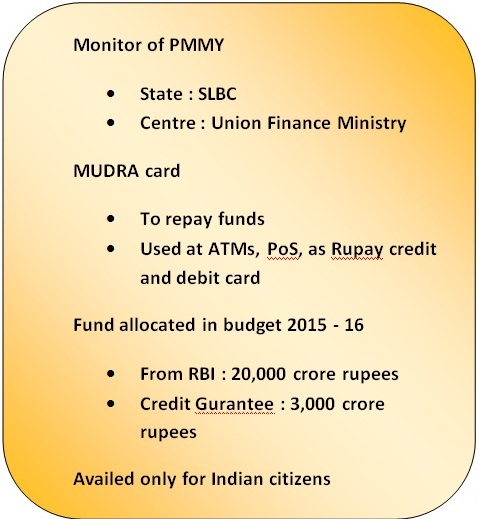 Mudra has identified 97 nodal officers to act as first contact person. These officers are seated in SIDBI (Small scale Industries Development Bank of India) banks of their zones.

One such MUDRA is PMMY

The PMMY scheme has introduced a MUDRA card to refinance in a hassle free conduct. The card can be used as a Rupay card to debit and credit money from the account and also at Point of Sale machines. It primarily aids in repaying the amount as and when surplus cash is available. This reduces the interest cost at an elevated plane. 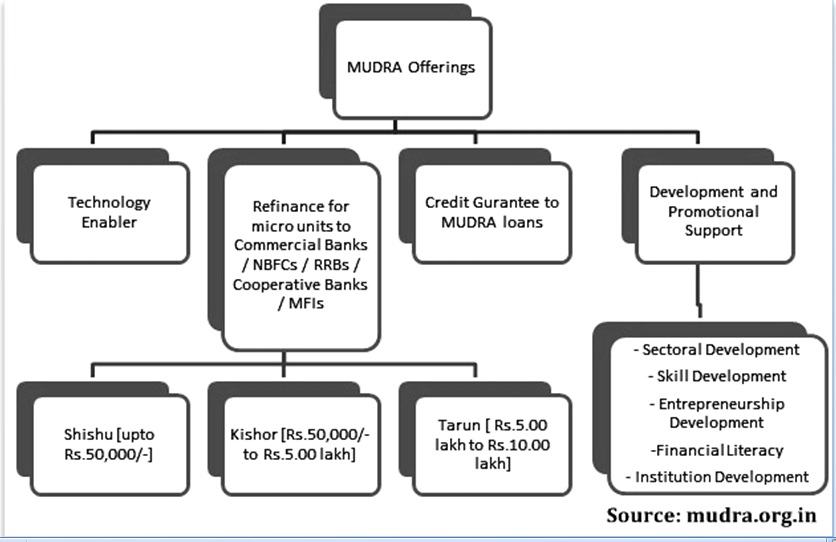 Now all the regulatory and supervisory frameworks of PMMY are being carried out under MUDRA banks. PMMY offers a minimum of 60% of financial support to enterprises in the fewest sectors. First time or First generation entrepreneurs, entrepreneurs’ up to the age of 30 years and women entrepreneurs are encouraged with special schemes.

The best thing about PMMY is that it consigns it emphasis on cash flow based lending. It completely boycotts COLLATERAL SECURITY.

Finance Minister, Arun Jaitley, while presenting his union budget for 2017 – 18 announced that he is proposing to double the lending target of PMMY to 2.44 lakh crores.  This is almost double when compared with the budget allocation in the previous years of 1.3 lakh crores. He also added that PMMY has exceeded it allocated fund of 1.8 lalkh crore. This is a vital step in creating jobs and employment.

Challenges in the path of PMMY

The way ahead of PMMY

There has to be a strict condition that the entrepreneurs should maintain books of accounts on revenue, output, taxes, employees and expensesThe government has to take initiatives in extending the mobility of the firms to medium and large sizes.

The aims of the policy must make the benefiter grow out of their sizes under a constant monitoring unit led by government.

Last but not least objective criteria have to be made in an apolitical fashion which is highly challenging. 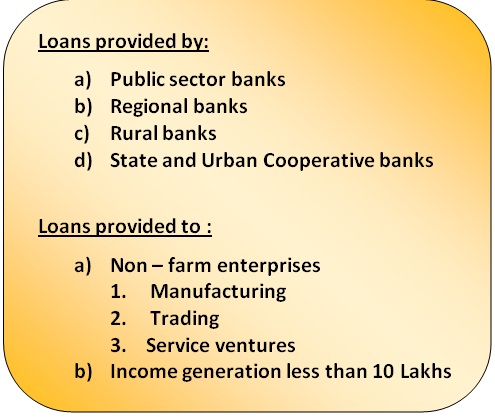 India is making a rapid move towards establishing a robust manufacturing base for a sustained growth and job creations. This movement cannot solely rely on the big corporate as they are limited in their extent of high value generation. Therefore small business units have to be mainstreamed with better institutional financial support.

A very similar and existing support is NCSBS – Non Corporate Small Business Sector which is also under MUDRA. It focuses on myriad of small manufacturing units, repair shops, fruits vegetable vendors, artisans, food processors, and many others. They create in numerous input bases and supplement the total output for national and international consumption. This is definitely a precise attempt to strengthen MAKE IN INDIA. But to trust in successful and dedicated implementation, government has to integrate PMMY, NCSBS and other such small scale support lines to get a vigorous harvest.

TUF stands for Technology Upgradation Fund Scheme. IT was launched in 1999 to serve the textile industry. Though it was launched for 5 years at the beginning, later was extended on its remarkable contribution in productivity.  TUF contributed around 4% of GDP and created employment for 35 million people (Source : mudra.org). Our Indian textiles are less competitive internationally as it suffers a loss in the face of low quality high quantity and low quantity high quality exports!

Hence the in order to quench the dwindling market thirst it is highly significant to install new technologies and machineries to simultaneously improve quality and quantity of the export products.

In light of the above, financial support of PMMY, with technology as a special sector will absolutely complement its success predecessor TUF. PMMY will undoubtedly help to meet its immediate capital and credit requirements.

According to the 2016-17 budget, PMMY has to get back its disbursement of 1.22 lakh crore. Such a high ambitious targets would certainly have to overcome a lot of hurdles.

Obstacles of PMMY in Accomplishing the Goal

The true success solely rests on Skill development and knowledge. With PMMY’s financial support the loaner has to update himself with the technologies and other skill sets. The government has to take a good care of such conditions to avoid the effort of PMMY go in vain.

The gap in the growth orientation that is lacked by the small units has to be filled in.  Hence, the linking of NRLM – National Rural Livelihood has to be planned wisely. Small units generally lack the spirit of enhancing their scope and thereby the market development skills which could endanger PMMY. Growth and a good market expansion is necessary to make small units viably good.

Illiteracy is another challenge that has to be looked upon. Information and Skill quotient is meek in rural areas mainly because of illiteracy. In such situations even a high end financial support could lead to jeopardy.

Where does PMMY needs to be improved?

PMMY has not yet considered NPA – Non Performing Asset. NPA is a credit facility for which the principal or interest payment remained overdue over time duration of 90 days. PMMY has not taken a note of NPA which is a conspicuous concern.  Further, the feature of almost zero percent lending would accentuate the NPA mess more.

Bottom-line, collecting such huge amounts becomes difficult. So, the Credit Guarantee Element of the Yojana has to be resolved and the PSBs have to be pushed to achieve the scheme targets.

PMMY is definitely a potent step towards the development of economy enhancing the income generation in the country. It has put a step ahead when compared to other schemes in rewarding the young entrepreneurial achievers in supporting their credit standing.

Ultimately, PMMY in collaboration with the partner institutions can succeed a great financial security for the country.

Quiz on PMMY – Test yourself