Micro Units Development and Refinance Agency Bank (MUDRA Bank) was set up as a public sector financial institution on 8 April 2015 under Pradhan Mantri MUDRA Yojana (PMMY). It is set up to provide loans at low rates to Micro-Finance Institutions (MFIs) and Non-Banking Financial Companies (NBFCs) which then provide credit to MSMEs. 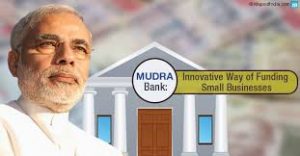 Three categories have been identified in which the loans will be disbursed by the MUDRA Bank. These are:

Government has decided to provide an additional fund of Rs 1 trillion to the market and will be allocated as 40% to Shishu, 35% to Kishore, and 25% to Tarun.

Roles and Responsibilities of MUDRA: