The Central Government announced the launch of the Pradhan Mantri Khanij Kshetra Kalyan Yojana (PMKKKY) aimed to provide basic amenities and for the welfare of areas and people affected by mining related operations, using the funds generated by District Mineral Foundations (DMFs). 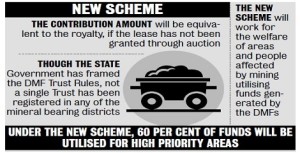 Government notified the rates of contribution payable by miners to the DMF as follows:

Under the PMKKKY, the government has put special emphasis on several aspects of what can be defined as a healthy lifestyle.