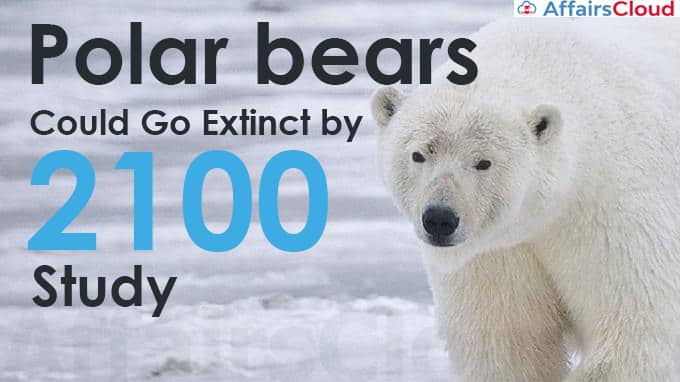 The new study of University of Toronto Scarborough published in the journal of Nature Climate Change titled “Fasting season length sets temporal limits for global polar bear persistence” on 20th July 2020, states that climate change is starving the polar bears into extinction and concluded that the Polar bears in the Arctic could become extinct by 2100.

Polar bears are listed as vulnerable to extinction by the International Union for Conservation of Nature (IUCN), with climate change a key factor in their decline.

i.The sea ice of the arctic region has been declining at the rate of 13% per decade since 1970, which provides a vital habitat for the wild lives like polar bears, seals and walruses.

iii.The report states that the animals have reached their survival limits due to the shrink of arctic sea ice.

i.The bears face a longer fasting period before the ice refreezes impacts the survival of the cubs and adults.

iv.The female bears without cubs have capacity to last a long period without food than the females with cubs.

v.The decreasing body weight reduces the chance of their survival in the Arctic winters without food.

vi.The study concluded that the high greenhouse gas emission, and declining reproduction and survival will jeopardize the high arctic subpopulations by 2100.

The moderate reduction in the emission of greenhouse gases will increase the life expectancy of the polar bears.

ii.Out of all the animals classified as threatened with extinction only polar bears are endangered primarily by climate change.

iii.The polar bears in 12 of the 13 subpopulations will have been decimated within 80 years due to increasing arctic temperature.

iv.Only around 25,000 polar bears are there in the wild and if the current scenario continues the polar bears will only be found in the Queen Elizabeth Islands – an archipelago in Canada by the end 2100.

i.80% Indian bird species population on decline in past 5 yrs: State of India’s Bird 2020 report.