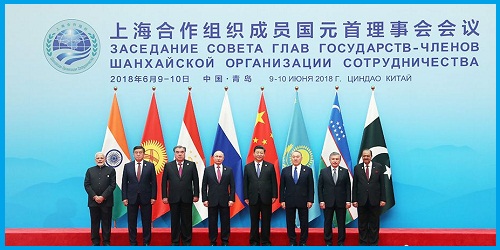 On June 11, 2018, the 18th SCO summit concluded with the adoption of ‘Qingdao Declaration’.

The SCO Action plan for 2019 to 2020 was also signed. This is the first time India is participating as a full member of the Shanghai Co-operation Organization (SCO) .

On June 10,2018, PM Modi calls for the increased connectivity and cooperation among the SCO nations.

On June 9, 2018, On the sidelines of the SCO summit India and China signed 2 agreements on Brahmaputra water data sharing and non-basmati rice export.

On June 9,2018, India and China agreed on jointly undertaking an economic project in Afghanistan.

On June 11, 2018, On the sidelines of the SCO Summit 2018, India and Uzbekistan reviewed bilateral ties for boosting economic and cultural links.

Indian PM  had a meeting with the President of Iran Mr. Hassan Rouhani on the joint comprehensive point of Action called the 2015 Iran nuclear deal. Moscow has an important role in this . India is an importer of Iranian oil.

The summit included Chinese President Xi, Russian President Vladimir Putin, Iranian President Hassan Rouhani and Pakistan President MamnoonHussain. The SCO was founded at a summit in Shanghai in 2001 by the presidents of Russia, China, Kyrgyz Republic, Kazakhstan, Tajikistan and Uzbekistan. India and Pakistan became its members in 2017. It is a counter organization to NATO.