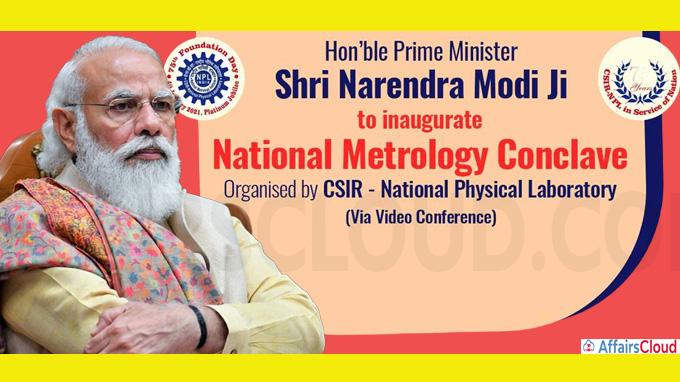 On January 4, 2020, Prime Minister (PM) Narendra Modi virtually inaugurated the National Metrology Conclave 2021 on the theme ‘Metrology for the Inclusive Growth of the Nation’ and also delivered the inaugural address.

Bhartiya Nirdeshak Dravya (BND): It helps the industry to make quality products in sectors like Heavy metals, Pesticides, Pharma and Textiles by drafting a ‘Certified Reference Material System’ at par with international standards.

National Environmental Standards Laboratory: It is India’s first laboratory for self-reliance in the certification of ambient air and industrial emission monitoring equipment. The Ministry of Environment, forest & Climate Change (MoEF&CC) has designated the CSIR-NPL as the verification and certification agency for emission and ambient air pollution monitoring equipment in India.

Dr. Harsh Vardhan released a Book titled “Metrology for Inclusive Growth of India”, edited by Dr. D.K. Aswaland contributed by CSIR-NPL’s Scientists. This book signifies the role of metrology for inclusive growth in India and describes various metrological applications. He also releases a “Thesaurus of NPL” on the occasion

Dr. Harsh Vardhan, first inaugurated the “Poster Gallery” depicting the mandate of CSIR-NPL and its achievements at CSIR-NPL.

ii.The 1st ever Cannabis Medicine Project at Jammu, will be set up with collaboration of Canada at CSIR-Indian Institute of Integrative Medicine (IIIM) in Jammu.